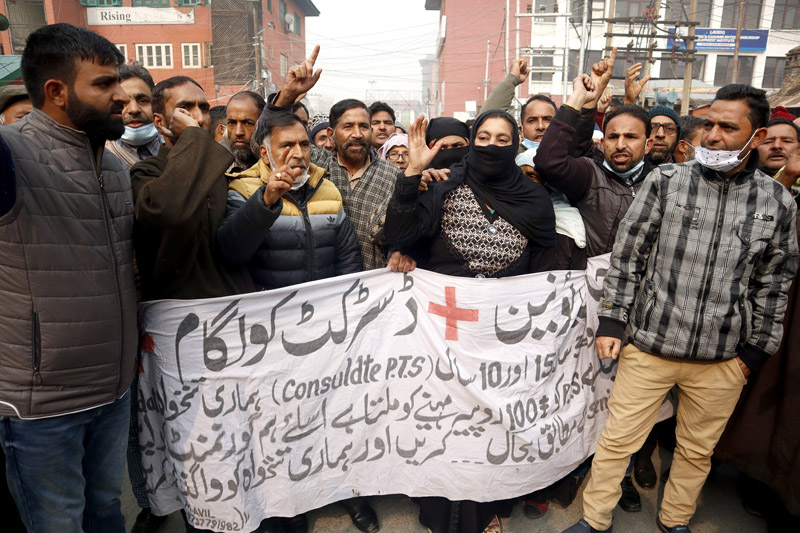 SRINAGAR, Nov 22: Part-time Health Department sweepers and helpers protested here today, demanding implementation of the minimum wages and regularization of their services.
Scores of sweepers and helpers assembled in the Press Enclave here and raised slogans in favour of their demands. The protestors alleged that the department is putting the poor sweepers through problems by delaying the implementation of the Minimum Wage Act.
“We want the Minimum Wage Act to be implemented for us, and we want our salary to be released in accordance with the law. The department adopted the Act in 2018, but we have not been included in it,” Abdul Ahad, Chairman of the All Jammu and Kashmir Consolidated Workers Union, said.
The protestors said that the Director of Health Services Kashmir had earlier presented a proposal to the government for the implementation of a minimum wage act for part-time sweepers, but that the proposal had been ignored by higher authorities. “We want the government to consider the proposal as we are struggling to run our homes on meager salaries,” a protestor said.
The protestors said that their regularisation has been pending for the last three decades, but they are yet to be considered for regularization despite several appeals to the authorities. “We demand that our services be regularised and that SRO 460 be applied,” a protestor said.
The protestors urged LG Manoj Sinha and Finance Department officials to examine their proposal as soon as possible and apply the minimum wage statute for them, as well as regularise their services.