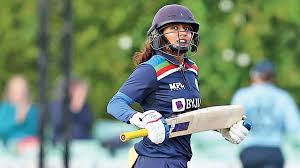 Dubai : India captain Mithali Raj retained her number three spot among batters while her veteran compatriot Jhulan Goswami maintained her second position among bowlers in the ICC women’s ODI rankings issued on Tuesday.
Raj, who has 738 rating points to her kitty, is behind Lizelle Lee (761) of South Africa and Alyssa Healy (750) of Australia as there was no change in the top-10 batters from the previous rankings.
Another India batter Smriti Mandhana also remained on sixth spot with 710 points.
Among the bowlers, Goswami (727) is behind leader Jess Jonassen (760) of Australia.
Pakistan left-arm spinner Nashra Sandhu climbed four places to 17th spot after her impressive figures of 2/24 against Bangladesh in the ICC Women’s World Cup Qualifier in Zimbabwe on Sunday.
Bangladesh batters were also among the top gainers with Fargana Hoque and Rumana Ahmed making significant progress.
Hoque’s 90-ball 45 that laid the foundation for Bangladesh’s victory helped her gain one slot to reach the 25th position, whereas Rumana Ahmed, who remained unbeaten on 50 climbed five places to reach the 29th spot. (agencies)