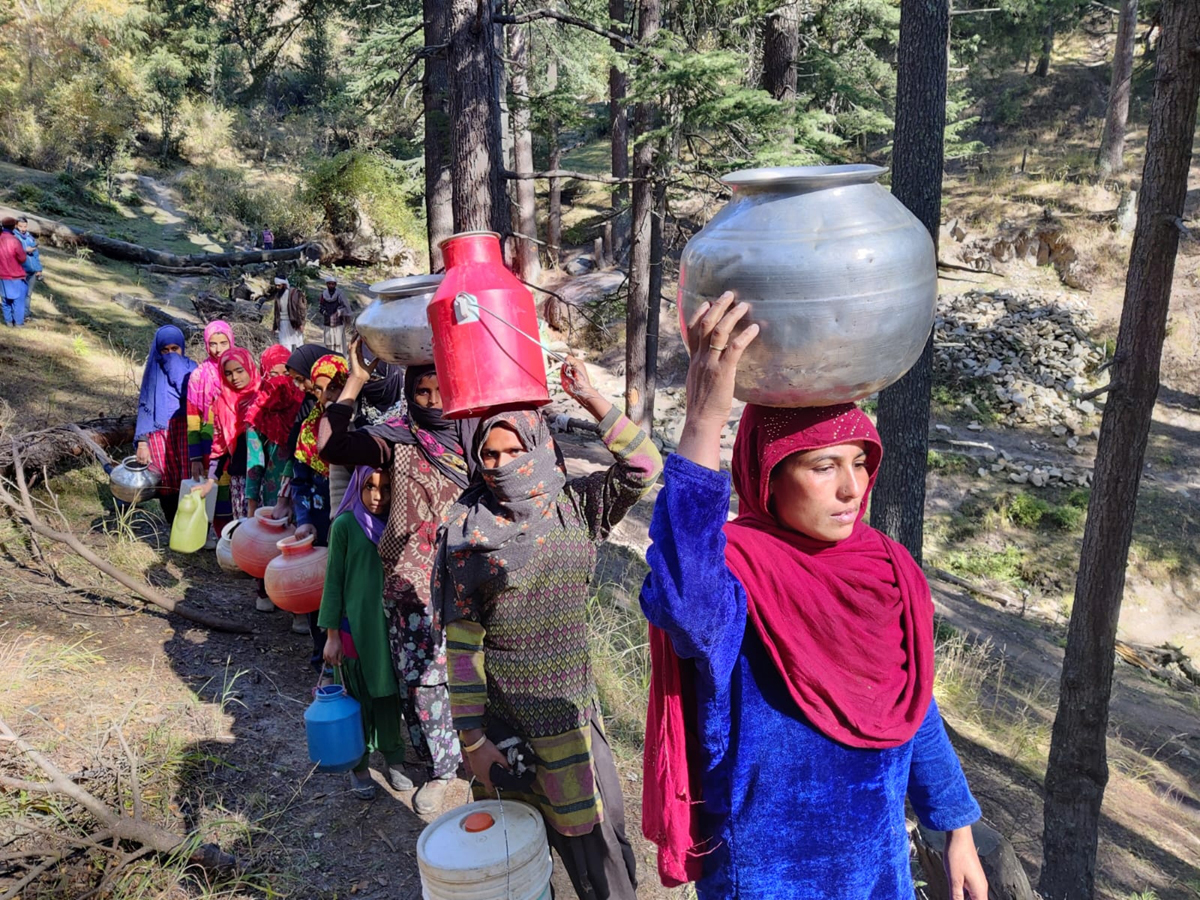 Excelsior Correspondent
BHADERWAH, Nov 21: More than a dozen tribal girls have left their studies midway in the last two years in a remote hamlet in Doda district amid severe shortage of drinking water there.
The Chenara village falls under Misrata panchayat in Bhaderwah sub-division — 57 kms from the Doda district headquarters — and is inhabited by Below Poverty Line (BPL) Gujjar population.
It is reeling under severe water crisis since the last two years due to the drying up of natural water resources caused by scanty rainfall.
The girls claimed that the non-availability of water forced them to quit school even as an official said that the village would be covered under the Jal Jeevan Mission (JJM) soon.
However, it will take some time to implement the project and provide potable water to the villagers, the official added.
According to villagers, the women folk, especially girls, are forced to travel through a dense forest for miles every day to collect water for themselves and their cattle.
On several occasions, they return with unhygienic muddy water and have to spend a lot of energy to make it drinkable, they said.
“I have a passion for studies and with great difficulty, I managed to study till the 12th standard. However, I quit studies last year for the sake of my family as I have to collect water every day and I was not getting enough time for studying,” 18-year-old Rubina Bano, one of the girl said.
Bano said girls like her have no option but to quit studies as they have to spend hours every day on locating and fetching water from far off areas.
Corroborating her views, 16-year-old Fatima said due to lack of time for studies, she appeared twice for her eighth standard exams but could not clear them on both the occasions.
“The reason for my poor performance was largely because I was spending hours every day on fetching water instead of studying. I do not want to write the exam again as I don’t believe that I would do any better this time around,” she said.
She said getting a day’s supply of water means multiple trips to the natural springs.
A local resident, Abdul Rashid Gujjar, said when piped water supply is not given to homes, the burden of fetching it falls disproportionately on women and children, especially girls.
“The given circumstances have taken a serious toll on the education of girls as at least 15 of them have quit their studies in the last two years,” said Gujjar, whose daughter Nazia was in the fifth standard but dropped out of school recently.
He said the girls spend around eight to 10 hours daily on fetching water which is a colossal waste of their valuable time.
Bibi Begum (45), another local resident, said they want their daughters to go to school but having access to potable water is the top priority as “we have to save our lives and the lives of our cattle.”
“In our village, we are worried about how and from where to collect water for marriage ceremonies or if someone dies,” she said.
Executive Engineer, Jal Shakti Vibhag, Doda Harjeet Singh said according to the reports of the field staff, the hamlet is without piped water supply.
“For a detailed project, I will send a team there and will try to provide drinking water to the village under JJM but it will take some time to implement the project and provide potable water to them,” he said.