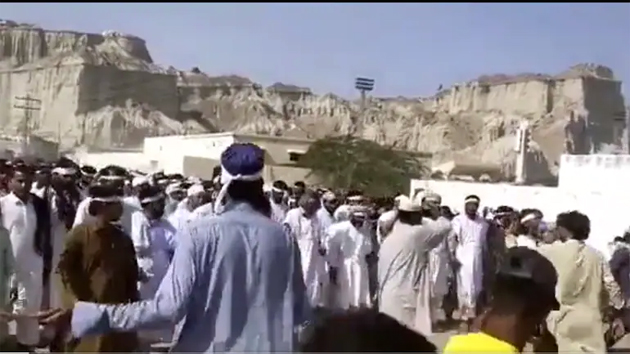 GWADAR : Massive protests have erupted in Pakistan’s port city of Gwadar against unnecessary check posts, the acute shortage of water and electricity and threats to livelihood from illegal fishing — as part of a growing backlash in the Balochistan region against China’s multibillion-dollar CPEC project.
Hundreds of children of Balochistan joined the protests in Gwadar city against the China-Pakistan Economic Corridor project and bottom trawling method of fishing that is destroying the waterbeds.
Children participating in the protests were demanding teachers in schools, a drug free Gwadar, better healthcare, and respect for their parents. Maulana Hidayat-ur-Rehman, Provincial General Secretary of Jamaat-e-Islami (JI) Balochistan who is spearheading the “Haq Do Gwadar Ko” movement, has said their protests will continue till their demands are met.
Most areas of Gwadar are facing 21 hour-long electricity cuts and severe water shortage as the supplies have been diverted for Chinese use. The people of Balochistan, where Gwadar is located, are also angry over the discrimination against the Baloch people by the Chinese and the Punjabi-dominated Pakistan army.
The Baloch fishermen are concerned over Chinese fishing trawlers taking away all the fish from the area. Maulana Hidayat ur Rehman said that thousands of children have rallied in Gwadar.
“Gwadar’s children, young and old are all committed to their rights. The government has to comply with our demands and give the people of Gwadar their due. There will be no compromise on less than that,” he said.
The Jamaat-e-Islami has backed the protest by Maulana Hidayat ur Rehman, and said the “message of Gwadar will be conveyed in the youth sit-in in Islamabad on November 28”.
On Thursday, a delegation sent by the Chief Minister of Balochistan returned empty-handed as the protesters refused to end their protest. Thousands participated in the sit-in on Gwadar Port Main Highway.
A delegation was sent to negotiate with the participants. The protesters announced that the sit-in will continue till the government resolves their issues, including immediate removal of all unnecessary check posts and stopping deep-sea trawlers from fishing in the area because it was causing huge losses to the local fishermen.
Meanwhile, Pakistan Radio said that the Senate Standing Committee on Maritime Affairs will hold a meeting in Gwadar on Tuesday to deliberate upon different development projects in the port city.
The Chairman Gwadar Port Authority Naseer Khan Kashani will brief the Committee regarding progress on development projects including Gwadar Port Free Zone being completed under the umbrella of CPEC.
The Standing Committee will also visit Gwadar Port and the Pak China Technical and vocational institute in Gwadar. (UNI)