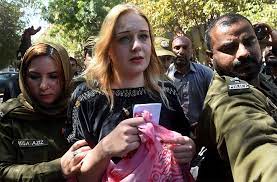 Lahore, Nov 21:A Czech model sentenced in 2019 to eight years in prison on charges of attempting to smuggle heroin from Pakistan to the United Arab Emirates was released on Saturday from prison following her acquittal earlier this month, her lawyer said.
Late in the evening, Tereza Hluskova left the prison in the eastern city of Lahore where she was handed over to representatives of the Czech Embassy and headed to the Pakistani capital, Islamabad, according to her attorney, Saiful Malook.
Czech Foreign Minister Jakub Kulhanek tweeted about the release, saying the embassy in Islamabad would help arrange her trip back to the Czech Republic.
The 24-year-old was arrested in January 2018 in possession of 8.5 kilograms of heroin at the Lahore airport from where she was heading to Ireland via Dubai, the United Arab Emirates.
Her sentence also included an $800 fine.
She was acquitted in early November by an appeals court in Lahore, the capital of Punjab province.
At the time of the arrest and during her trial, Hluskova, who had come to Pakistan to work as a model, pleaded she was innocent and that someone else placed the narcotics in her luggage.
Authorities in Pakistan regularly arrest both Pakistanis and foreigners over drug smuggling. (AGENCIES)