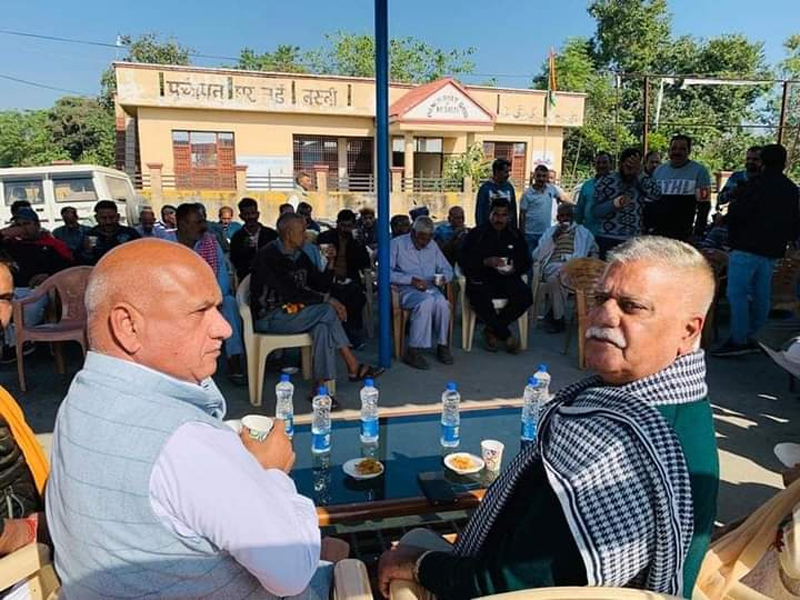 JAMMU, Nov 20: The Central Government led by PM Narendra Modi is committed to develop rural areas at par with urban areas as the same is a prerequisite for making India a developed nation.
This was stated by DDC Chairman Jammu, Bharat Bhushan after inaugurating construction work on the road stretch connecting Nai Basti Panchayat to Gango Chak Panchayat. The road stretch starting from Bathoor to Gol Pattan will be constructed under NABARD with an estimated cost of Rs. 2.93 crore. Former MLA Sukhnandan Choudhary was also present on the occasion.
Speaking on the occasion, the DDC Chairman said that development of rural areas holds much significance as still large segments of the population lived in villages. He said that development of villages has been one of the priorities of the Modi Government and the imbalance between urban and rural areas has to be removed to offer quality life to people living in far off hamlets. He said that villages have to be self-sufficient and agriculture has to be made more profitable, and for this roads and other infrastructure has to be made robust.
Bharat Bhushan said that various exclusive schemes have been formulated to benefit the people hailing from rural India who will eventually become the pillars of the country’s economy in the long run. He said that small steps taken in building rural infrastructure will subsequently help in bringing about colossal change in the entire country and asked the people to act as the arms of the Government in accomplishing this cause to steer India to new heights of progress.
He said that the policy envisaged by Prime Minister, Modi will soon put an end to the difference between urban and rural lifestyles as the same convenience and facilities will be available in villages as are currently available in cities.
Prominent among those who were present included J&K BJP Kissan Morcha president, Omi Khajuria, DDC Marh, Balbir Lal, BDC Marh, Surinder Kumar, State secretary BJP J&K, Vikas, Ex Sarpanch, Nai Basti, Om Prakash, Sarpanch, Gajansoo Panchayat, Tilak Raj Choudhary, Ex Sarpanch, Saharan Panchayat, Sham Lal, Sarpanch, Galwadey Panchayat, Vikramjeet Manhas, Sarpanch, Dhatreyal Panchayat, Parshotam Lal and Sarpanch, Rathua Panchayat, Lal Singh.