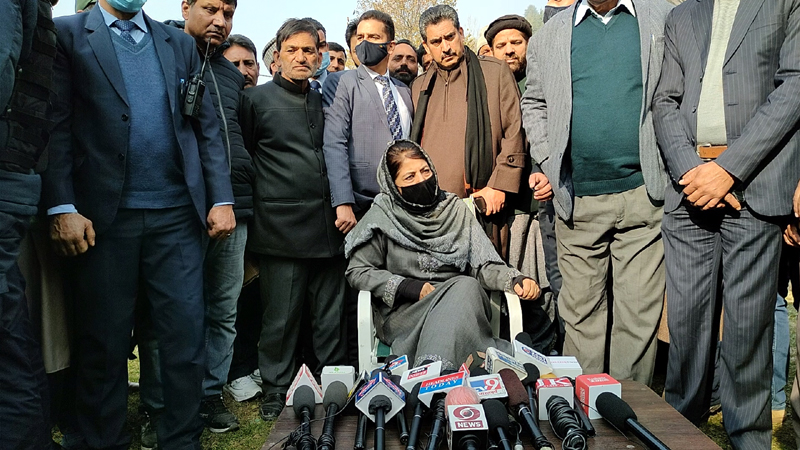 Srinagar, Nov 20 : The former Chief Minister and PDP president Mehbooba Mufti today said that Hydepora like encounter killings widen the void between New Delhi and J&K.
Speaking to reporters on the side-lines of her visit to Kupwara district, Mehbooba described the Hyderpora killings as the height of injustice for which the Lieutenant Governor of Jammu and Kashmir must take responsibility since he is heading the administration of the region.

“Apart from being the UT administration head, the LG is the New Delhi’s man appointed here. He is the one responsible for the lives of people and everything belonging to them,” the PDP chief said.
Mehbooba said that Amir’s father has been rewarded for killing militants in the past and they are yet to get his body and such acts will further disturb the situation and widen the gap between Jammu and Kashmir and New Delhi further.
“As long as such incidents continue to surface, the situation will not normalise,” she said and urged the LG to return the body of third slain Amir Ahmed of Banihal to his family for last rites.
In response to a query related to the withdrawal of farmers’ bills, she said that unlike the states of Uttar Pardesh and Gujarat, J&K doesn’t have Parliament seats in large numbers as it has only five including Ladakh.
“It took 70 years for BJP to come to absolute power and take a decision like August 05, 2019, and similarity it may take 70 more days or months to get the decision reversed since nothing is impossible in this world”, she said.
“We will continue to strive hard for the restoration of Article 370 and 35A under the Indian constitution which has already guaranteed it to the people of Jammu and Kashmir”, she said.
About Indo-Pak talks, the PDP president said that there is no way or alternative to it, and reopening of the Kartarpur corridor and the cease-fire agreement between the two countries is an example of talks between the two countries.
She also said that “National Security Advisors are holding talks in other countries and  Pakistan’s NSA was invited recently for talks related to Afghanistan and “if we tell the same, Delhi gets offended but dialogue has to take place as Vajpayee did in the past who was BJP’s highest stature leader”.
Talking about elections, she said that elections have never been a solution to the J&K issue adding that they are ready for the elections no matter when conducted.