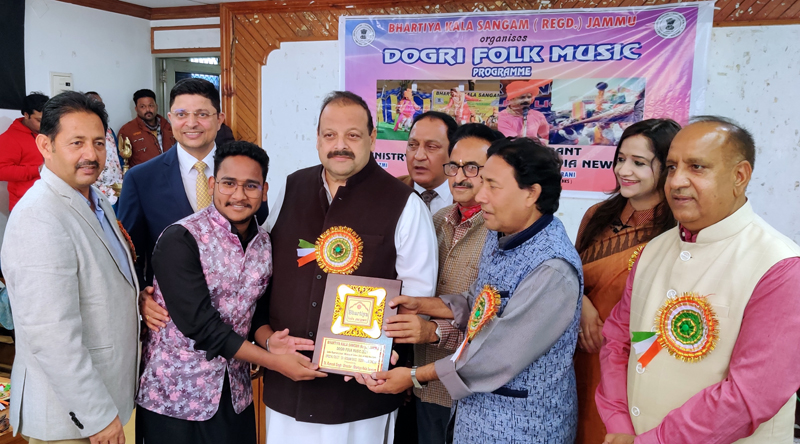 JAMMU, Nov 20: Exhorting people, especially the youth, to develop passion for their mother tongue , BJP leader and former legislator Devender Singh Rana today said that death of one’s own language is like death of soul.
“We must develop passion and deep love for our mother tongue and not shy in making its use in day to day life, at our homes in particular”, Rana said while speaking to a distinguished audience of art and music lovers at the Dogri Folk Music programme held under the aegis of Bhartiya Kala Sangam under Repertory grant of Ministry of Culture, Govt of India. New Delhi at K.L Saigal Hall of Jammu and Kashmir Academy of Art, Culture and Languages,
He said Jammu and Kashmir is repository of Dogri, Gojri, Kashmiri, Punjabi, Pahari, Pogi, Saraji, Bhaderwahi, Padri, Kishtwari, Balti and other languages and their promotion is imperative for harmony and bonding of the people. Being well versed in other languages alongside the national language is the need of the hour and this can place everyone in good stead in the fast changing world, he added.
Referring to Dogri language, the BJP leader exhorted Dogri artists, intelligentsia and scholars to ponder how the pristine glory of this rich language is restored in the larger interest of bringing Dogras, irrespective of religion, cast or colour together.
Rana said that though it may be easy to sermonize that we should be speaking Dogri yet the reality is that Dogras are shying away making use of this language in homes. Therefore, much onus lies on the artists and scholars, who are conscious keepers of the Dogra heritage, to play their crucial role in promoting, propagating and sustaining Dogri. He expressed happiness that Dogra youth engaged in music and theatre have succeeded in breaking the ice and making the language very popular among the youth. It is heartening that apart from Dogras, non Dogras too are evincing interest in Dogri Sangeet he added.
The BJP leader exuded confidence that harmony and reconciliation can be achieved as a result of reclamation of Dogri language. He said the Dogras, irrespective of caste, creed and religion are proud inheritors of the Dogra heritage and a collective effort is needed to make Dogri a day to day language.
Earlier while welcoming the guests, Sohail Kazami Patron-in-Chief Bhartiya Kala Sangam gave a brief account of activities with regard to art, culture and languages done so far since its inception from 1980.
Main highlight of the event was the team of filmmakers from Mumbai comprising Rohit Puri, Rohan Sharma and Rhea Rane, who were special guests. Besides Tilak Raj Tagotra, Surinder Singh Manhas, Asha Kesar, Bishan Dass, Rao Brothers, Neeta Adarsh and party, Suman Raju enthralled the audience. The instrumentalists, who accompanied the singers were Rakesh Masihe Khanna, Flute, Joginder Paul, Tabla, Chandan, Sinth.
The programme was anchored by Radio TV Announcer Rajni Sharma and vote of thanks presented byT.R. Sharma, Chairman BKS.
Prominent among those present on the occasion included Vinay Sharma, Sr Supdt. of Police, AS Amn, Addl. Secretary, JKAACL , Sunaina Sharma, KAS, Addl, Secretary to Govt., Baldev Singh Beloria, Sheetal Bharti, Inspector J&K Police, Javeed Kakroo, Social Activist and Er. Ashok Singh, President, J&K Delphic Council were Guests of Honour besides special guests and distinguished audience, Besides, Sohail Kazami, Chief in Patron, T.R. Sharma, Chairman and Romesh Singh Chib, Director of Bhartiya Kala Sangam.