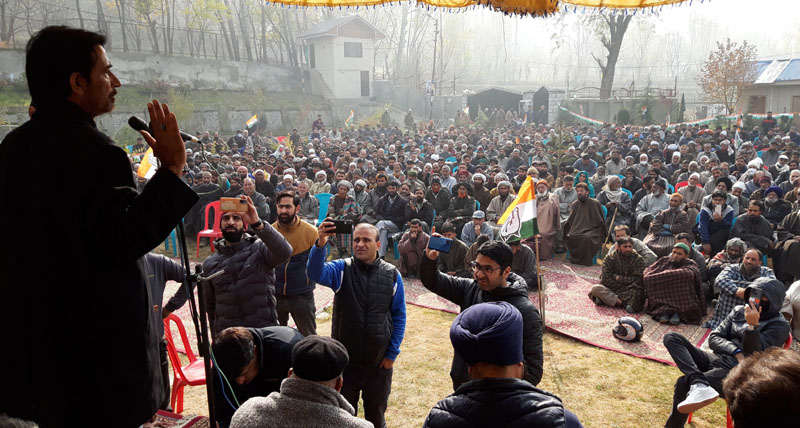 VERINAG, Nov 20: The Jammu and Kashmir Pradesh Congress Committee (JKPCC) today described the decision to revoke three farming laws as outcome of the sacrifices and struggle of the farmers.
The Party also lauded Rahul Gandhi’s incomparable strong opposition against the unwanted three farming laws, describing the decision of the Centre as historic victory for famers and Congress, who both remained committed to fight against these laws.
JKPCC president Ghulam Ahmad Mir made these comments while addressing a largely attended party workers’ convention in Verinag area of Anantnag district today.
Congress workers convention Part of party’s Jan Jagran Abhiyan was also observed as `Kissan Vijay Divas’ after the Centre decided to repeal farming laws.
JKPCC vice president and former minister Raman Bhalla, vice president Abdul Rashid Dar, Gulzar Ahmad Wani (Former Legislators), gen secretary Surinder Singh Channi and various other party leaders addressed the convention.
Mir reminded the Party workers about the Rahul Gandhi’s assertions after the Centre brought in three farming laws, in which he categorically dismissed the Centre’s theory with regard to these laws, he had told the Nation that Modi Govt has to revoke these laws as the farmers had not sought such unwanted laws, which were indeed detrimental to their interests.
Congress party under the leadership of Rahul Gandhi fought against the Centre’s farming policies with robustness lending its full support to farmers, as a result, Centre decided to repeal these. Even after loss of hundreds of precious lives of farmers the Centre remained adamant not to backup, but after sensing defeat in upcoming elections, besides the public opinion which is against BJP, it (Centre) decided to revoke the laws, Mir added and said Nation is yearning for the change.
Mir said the Jan Jagran Abhiyan launched by the party is aiming to highlight and lodge strong protest against policies of the Centre towards the people, the Party will continue to fight against BJP Govt on the issues of public importance inorder to make it accountable and answerable to people.
Speaking on the occasion PCC vice president Raman Bhalla said that Jan Jagran programme is one of the party’s great endeavor to reach out to people to highlight their problems, which they have been facing since the Modi Govt assumed power at Centre. What kind of Governance BJP is talking about, in which common people have no right to say anything or protest against the unwanted decisions and policies of the Govt imposed on them, he questioned.
Bhalla expressed serious concern over the highest rate of unemployment, inflation and economic crisis in J&K and said every sector in J&K is worst hit due to the policies adopted by the Govt.
Abdul Rashid Dar, Gulzar Ahmad Wani and Surinder Singh Channi also addressed the gathering.