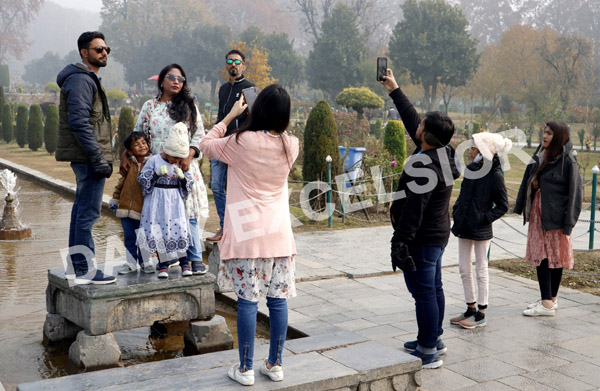 Srinagar, Nov 19: Early snowfall has boosted tourism in Kashmir and secured an early start to the winter tourist season, with tour operators receiving pre-bookings before winter has set in Kashmir.
The increase in tourist footfalls has encouraged the tour operators, who were concerned that the recent spate of civilian killings would have an impact on the upcoming winter tourist season, especially when travellers were hesitant to visit the Valley due to safety concerns.
“The recent civilian killings were having an impact on the Valley tourism industry, as most hoteliers and houseboat owners were seeing cancellations of the bookings,” a tour operator said. However, looking at the number of tourists since last month, he added they were optimistic that the upcoming tourist season will bring a lot of tourists here.
Manoj, a tourist from Gujarat’s Baroda, told Excelsior that he was initially reluctant about traveling to Kashmir, but that all his concerns vanished once he arrived. “Things have calmed down. We did not feel threatened. False information concerning Kashmir is being circulated on social media. I am feeling safe with my family here,” he said.
He said that he and his family have visited every tourist attraction in the Valley, including Gulmarg, Pahalgam and Sonamarg, and that they had experienced no problems. He described the Valley as “really a heaven on earth.”
Waseem, a visitor from Mumbai, agreed with him, saying that people should ignore the rumours and unfavourable news coming and instead plan their trip to the Valley. “I have travelled all the way from Mumbai. The people and the environment here appeal to me. There are a lot of tourists here. Some things have been said about the Kashmir, but I had no such feelings. I did not feel threatened. Tourists are treated with respect here. It’s like a family here,” he said, adding that he has been coming to the Valley for a decade and has never felt threatened.
Tourists who were visiting the Valley for the first time expressed their delight. “I am extremely happy here. I enjoy the cold because it is something we do not have in Mumbai. I would like to come back again,” Sachin, a tourist, said.
Tourists said that even though they are free to travel, they are still vigilant against COVID 19 and are following all SOPs. “From wearing face masks to applying sanitizer at regular intervals, we are following the COVID Appropriate Behavior as the country cannot afford a third wave,” one tourist said.
Manzoor Pakhtoon, president of Houseboat Association said, early snowfall has drawn numerous tourists and bookings have increased since the snowfall. “Tourists have flocked here in large numbers to spend their Diwali holidays, and the rush is expected to last for another week or two. We have already announced cheap packages, which has drawn travellers here,” he said.
He said the Tourism Department’s regular promotion has improved tourist footfall. “Promotion efforts have begun this winter, and we are looking for a healthy tourist season,” he said.