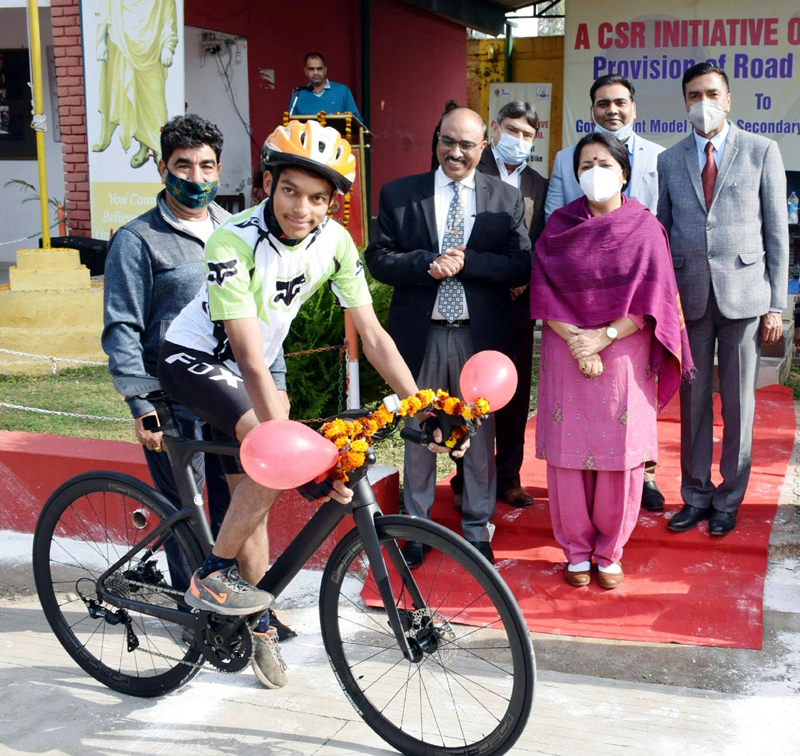 *DC hands over best gift of life to Sunil Kumar

Excelsior Sports Correspondent
UDHAMPUR, Nov 18: Deputy Commissioner, Udhampur Indu Kanwal Chib, in presence of a team of Indian Oil Corporation, today presented Rs 1.7 lakh (Approximately) Road Cycling cycle to a budding cyclist Master Sunil Kumar of Model Higher Secondary School Boys, gifted to him by Union Minister of State for Ministry of Parliamentary Affairs and Culture, Government of India, Arjun Ram Meghwal.
During his visit to Udhampur as a part of the public outreach programme, Deputy Commissioner and School Management had projected the demand to Union Minister, Arjun Ram Meghwal to present a Road Cycling cycle to the outstanding cyclist of the institution.
The demand was recommended to Indian Oil Corporation to be considered under CSR Scheme and the Corporation came up with same.
Divisional Manager, Indian Oil Corporation, Sanjeev Sharma along with his team visited the School and the Deputy Commissioner presented Java Fuoco Disc 105 Carbon B- Fusion Cycle to School management and the student at an impressive function.
Speaking on the occasion, the DC thanked to Union Minister for fulfilling the dream of Sunil Kumar. The DDC also interacted with the students and urged them to actively participate in the sports activities for their all round development.
The cyclist thanked the Union Minister, District Administration and School management for fulfilling his dream. He said that he will work to bring laurels to the district.
Earlier, the function started with Flag hoisting and singing of National Anthem.
A group of tribal students also presented a cultural item and song as institution is celebrating Birth Anniversary of iconic tribal freedom fighter “Birsa Munda”.
The Union Minister had also announced an indoor sports complex during his visit to the institution. The Principal handed over the DPR prepared by Sports Authority of India to Deputy Commissioner Udhampur and she assured to take up it with the Minister.
Amit Sharma conducted the proceedings of the stage and conveyed vote of thanks.