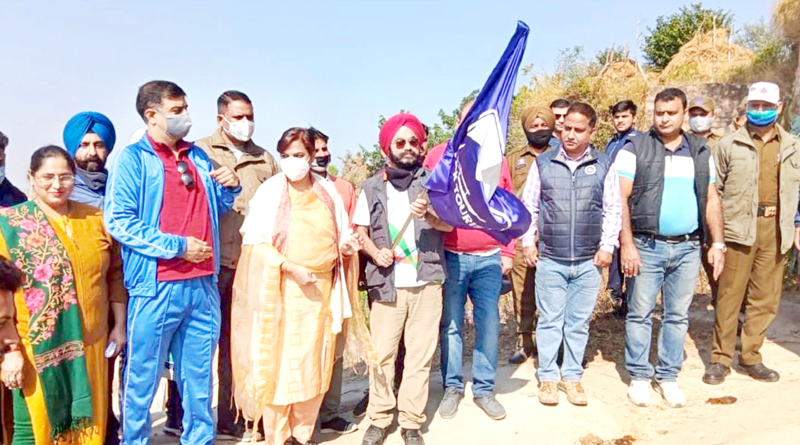 Excelsior Sports Correspondent
SAMBA, Nov 18: Directorate of Tourism Jammu, in collaboration with District Administration Samba, organized a one day Trekking expedition here from Tourist village Mahoregarh to Mansar lake.
A group of approximately 150 trekkers was flagged off from Kala Kendra Jammu by Vivekananda Rai, Director Tourism Jammu and Naresh Kumar, Deputy Director Publicity Jammu. Some of the participants were from Jammu Adventure Sports Association (JASA), FCI, Youth Service & Sports and some from Ramnagar area.
The Director Tourism Jammu, while briefing the media, during the flag off ceremony, said that this is an important Trek which the Deptt concerned has promoted from last few years for making Mansar and adjoining areas winter hub of soft adventure activities like trekking/adventure camps/ hiking etc.
The group of trekkers was received at Mahoregarh by Anuradha Gupta, District Development Commissioner, Samba and Gurvinderjeet Singh, Chief Executive Officer, Surinsar-Mansar Development Authority, Mansar. Starting the 7 KM trek from Mahoregarh Fort, which is believed to be an Afghan outpost, the trekkers enjoyed beautiful panoramic views of the nearby hills while ascending the trail.
Naresh Kumar, Deputy Director Tourism Jammu briefed the participants about the trekking gear and need for the cleanliness to be maintained in these areas. He emphasized that Mansar is a home to many trekking routes which makes the experience of a visitor more luxurious and adventurous.
On reaching the top one could see the bird eye view of the whole MansarLake adding to everyone’s delight. At the end of the trek, the participants were given certificates by Gurvinderjeet Singh, Chief Executive Officer, Surinsar-Mansar Development Authority and Naresh Kumar Deputy Director Publicity Jammu.
Balbir Singh, a trekker while sharing his experience, said that such trails give an opportunity to city dwellers to enjoy nature at its best. He hoped for joining more treks organized by the department in near future.