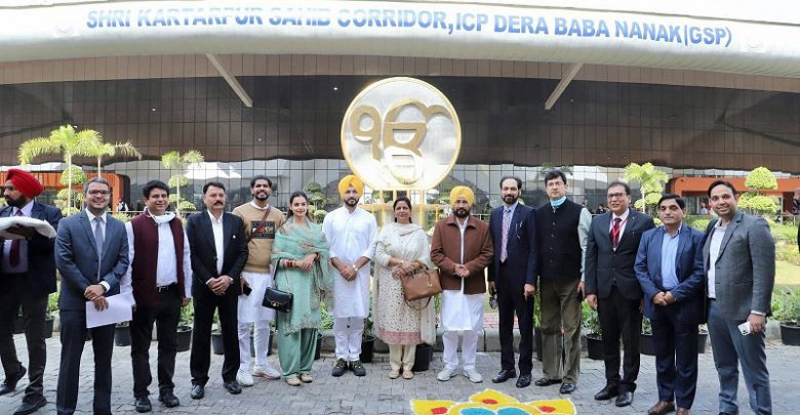 LAHORE/DERA BABA NANAK (Gurdaspur), Nov 18:
Punjab Chief Minister Charanjit Singh Channi along with some of his Cabinet ministers on Thursday offered prayers at the Gurdwara Darbar Sahib in Pakistan after travelling through the visa-free Kartarpur corridor that reopened for pilgrims after a gap of 20 months.
The over four-km long Kartarpur corridor links Gurdwara Darbar Sahib in Pakistan’s Kartarpur, the final resting place of Sikhism founder Guru Nanak Dev, to Dera Baba Nanak shrine in Gurdaspur district. Pilgrimage to the gurdwara was suspended in March 2020 due to the Covid pandemic.
Evacuee Trust Property Board spokesperson Amir Hashmi said in Lahore that besides the group led by Channi, a delegation of BJP leaders also visited the Gurdwara Darbar Sahib.
Punjab Chief Minister Charanjit Singh Channi along with about 30 persons, including his Cabinet ministers, today visited Gurdwara Darbar Sahib, Kartarpur, by using Kartarpur Corridor,” Hashmi told PTI.
Punjab Congress chief Navjot Singh Sidhu was not part of the Channi-led ‘jatha’ (group) which went to pay obeisance at the gurdwara.
Sidhu’s media advisor Surinder Dalla on Wednesday night had said that the Congress leader had been officially intimated that he could go on November 20 instead of November 18.
Kartarpur Corridor Project Management Unit Chief Executive Officer (CEO) Muhammad Latif, Pakistan Sikh Gurdwara Parbandhak Committee office bearers and Commissioner Gujranwala greeted the Indian guests who arrived at the gurdwara.
The first batch of 28 Indian Sikhs, including women, visited the Gurdwara Darbar Sahib in Pakistan on Wednesday by using the corridor on the first day of its reopening.
Latif said that over 100 Indian pilgrims were expected to visit the historic gurdwara on Thursday.
Channi, who was accompanied by his family members, Finance Minister Manpreet Singh Badal, PWD Minister Vijay Inder Singla, MLAs Harpartap Singh Ajnala and Barindermeet Singh Pahra, had crossed over to Pakistan at around 1 pm, officials said in Dera Baba Nanak.
Describing reopening of the Kartarpur Sahib corridor as a historic moment, Channi had said before crossing over that it is a joyous occasion as the corridor has facilitated numerous devotees to go to Kartarpur Sahib.
“The long-pending ‘ardaas’ of Sikh Sangat has been fulfilled and now they can offer prayers at this holy shrine without any hindrance ,” said Channi.
Talking to reporters in Gurdaspur district before going to Kartarpur Sahib, Singla said he along with his family was going to offer prayers at Gurdwara Darbar Sahib in Pakistan.
He added that he was going to the Kartarpur Sahib for the second time.
To a query, Singla said the Centre has given permission for travelling to Gurdwara Darbar Sahib in Pakistan to ministers and MLAs in a phased manner.
Earlier Thursday morning, a 21-member delegation of Punjab BJP leaders had reached the integrated check post at Dera Baba Nanak to cross over to Pakistan .
Punjab BJP chief Ashwani Sharma told reporters that he was thankful to the prime minister and the home minister for reopening the Kartarpur corridor to allow devotees to offer prayers ahead of the birth anniversary of Guru Nanak Dev.
Among those who were part of the BJP ‘jatha’ included Harjeet Singh Grewal, Jeevan Gupta, Tikshan Sud, Subhash Sharma and K D Bhandari.
The Centre had decided to reopen the Kartarpur corridor from Wednesday. ahead of Gurpurab, which marks the birth anniversary of Guru Nanak, on November 19. (PTI)