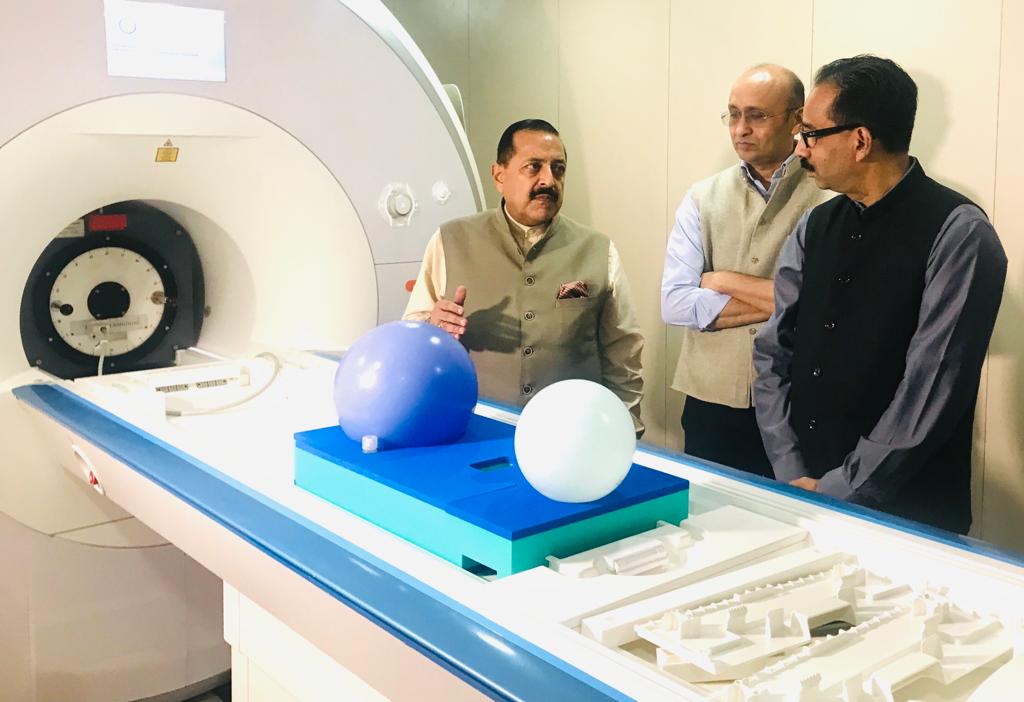 Haryana, Nov 19: Union Minister of State (Independent Charge) Science & Technology; Minister of State (Independent Charge) Earth Sciences; MoS PMO, Personnel, Public Grievances, Pensions, Atomic Energy and Space, Dr Jitendra Singh today inaugurated first of its kind, world’s latest MRI facility at the National Brain Research Centre (NBRC), Manesar Haryana, India’s premier institute dedicated to Neurosciences Research and Education.
The Minister said, with this facility, India embarks on new frontiers of human Neuroscience with a unique and powerful 3T MRI platform of outstanding performance. He informed that MRI Scanner Prisma from Siemens, Germany, is being used by several international initiatives, like Brain initiative of USA, the European human brain project.
Dr Jitendra Singh said, this new facility can run intense scanning modalities very fast, which reduces the scanning time for patients by almost a quarter from earlier generation machines. This is being used to develop human cohort data for patients suffering from common brain and mental health disorders including Parkinson’s Disease,Alziemer’s Disease, anxiety, depression, PTSD, bipolar, anxiety, depression etc.
The Scientists explained to the Minister that the novelty of this machine is that it can detect and quantify highly sensitive receptors and antioxidants from the brain which has a direct link with onset of various brain disorders like Alzheimer’s, Parkinson’s and psychiatric disorders. The machine is equipped to detect brain sodium levels, which has direct relevance for assessment of brain tumors non-invasively. Also, heavy metal deposition in the brain due to pollution or many other factors can be quantified as necessary for various psychiatric and neurodegenerative disorders. The Minister said, the cohort developed under the aegis of this Flagship project of NBRC will be a unique platform for tech institutes like IIT s, IIITs to apply artificial intelligence-machine learning tools and discover normative, diagnostic and prognostic patterns.
Later, Dr Jitendra Singh took a high level meeting with the Director and senior scientists and officials of the National Brain Research Centre (NBRC) and asked them to come out with a Special Intervention Study on Alzheimer, which could be of world class. The Minister underlined the need for a single-subject world class research at the Centre, which promotes translational research with a mission to discover rationale therapies and cures for brain disorders.
Dr Jitendra Singh complimented the scientists for several discoveries during the past year despite the challenges caused by the pandemic and the research is well cited by various researchers across the globe. He said, due to consistent efforts and scientific advancement, NBRC has established itself as an advanced center of global recognition for neuroscience research. The Centre through its M.Sc. and Ph.D. programs train personnel with knowledge and expertise to be able to efficiently conquer challenges and conduct interdisciplinary research in neurosciences, he added.
NBRC is devoted to studying brain functions in health and diseases using innovative multidisciplinary approaches in basic and translational research. Research at NBRC is classified into five divisions, namely Cellular and Molecular, Systems, Cognitive, Computational, and Translational. Nevertheless, faculty collaborate across divisions and other institutions to address their research questions. Located in the foothills of the Aravali range in Manesar, Haryana, NBRC is an autonomous institute funded by the Department of Biotechnology, Government of India, and is also a Deemed-to-be University. Govt. of India has recognised NBRC as an Institution of Excellence. National Brain Research Centre (NBRC) was established in the year 1999 as an autonomous institution under the Societies Registration Act of 1860. The NBRC, engaged in brain research, has deemed University status.
The main objectives of NBRC include undertaking basic research to understand brain function in health and disease. In addition to the intramural research activity at the main centre, NBRC also promotes networking of the existing research groups in neuroscience in the country. The research interests at NBRC span from molecular to behavioural and computational neuroscience. The Institute also promotes translational research with a mission to discover rationale therapies and cures for brain disorders.