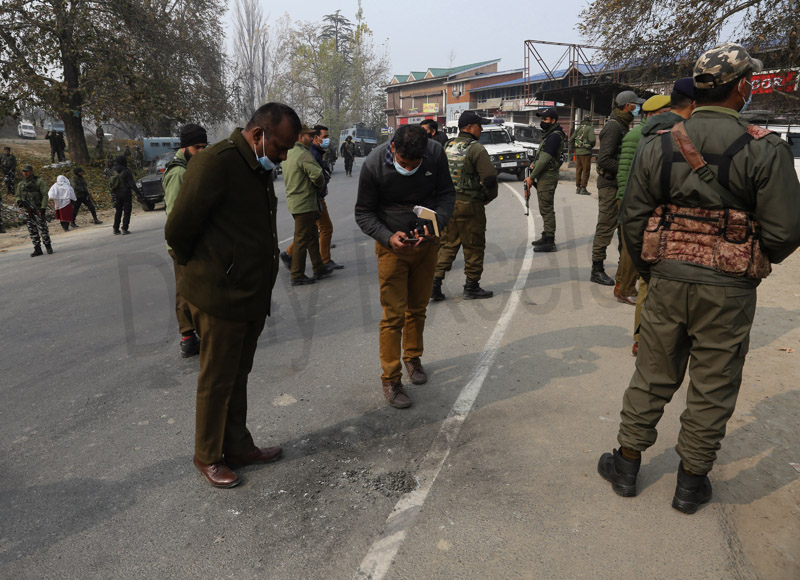 Fayaz Bukhari
SRINAGAR, Nov 17: A top commander of The Resistance Front (TRF) was among five militants killed in two separate gun battles in Kashmir today while four persons including two Central Reserve Police Force personnel were injured in a grenade attack.
Inspector General of Police Kashmir, Vijay Kumar said here that a joint team of Police, Army’s 9 RR and CRPF launched a cordon and search operation (CASO) on specific information about the presence of militants in the Pombay and Gopalpora villages of Kulgam district today.
He said that the hiding militants fired at security forces during the searches leading to a gun battle in which five militants were killed in these two villages.

Click here to watch video
“First contact was established with militants in Pombay and later in Gopalpora. In the ensuing encounters, three militants were killed in Pombay and two militants were killed in Gopalpora,” he said, adding that all five militants are believed to be locals while their identity is being ascertained.
Kumar said one among the killed militants is Afaq Sikandar, who was district commander of the TRF.
Two CRPF men and two civilians were injured when militants lobbed a grenade at security forces deployed in Palhalan area in North Kashmir’s Baramulla district today.
The attack took place on Baramulla-Srinagar Highway at Palhalan in which two CRPF men and two civilians sustained splinter injuries.
The injured were rushed to the hospital for treatment. Soon after the attack, the security forces cordoned off the area and launched a search operation to trace the militants.
Two active associates of Lashkar-e-Toiba were arrested from Pulwama today.
Police said that during joint naka checking by Pulwama Police, 55 RR and 182 Bn CRPF at Circular Road Pulwama, two associates of LeT Amir Bashir Dar son of Bashir Ahmad Dar of Sirnoo Pulwama and Mukhtar Ahmad Bhat of Abdul Jabar Bhat of Matri Bugh Shopian were arrested.
“Two ready to use IED’s were recovered from their possession. In this regard, case FIR No. 315/ 21 of PS Pulwama was registered and investigation taken up,” Police said.
The family members of Altaf Ahmed, the building owner and Dr Mudasir Gul, who were killed in Hyderpora encounter Monday evening today protested in Press Colony stating that both slain were innocent and that police should return their bodies for proper burial.
At Partap Park Press Enclave, emotional scenes were witnessed when Humaira Gul, the wife of Dr Mudasir Gul, staged a protest along with her one-year-old daughter and other family members. She said that her daughter has been crying- “baba, baba since Monday and she had no answers to her.”
She said police must come up with a proof that her husband was an OGW and the fact is that “my husband had no militant links and was earning his livelihood in a clean manner.”
Mudasir was among four slain in the Hyderpora encounter. Police said Mudasir was living in a rented room in a building where the encounter took place and that he had allowed slain militant Haider to use his rented room as a hideout. Police also said that Mudasir had ferried Haider in a vehicle from Jamalata area of Srinagar where he was injured in militant firing and was an OGW.
The family members of building owner Altaf Ahmed also protested at Press Enclave Srinagar demanding the body of slain back without any further delay.
“Today, we are protesting to seek the body of slain Altaf Ahmed back without any delay. If police don’t give us his body back, we will block all roads and protest on streets,” said Dr Haneef Ahmed, brother of Altaf Ahmad.
He said that all the former chief ministers-Omar Abdullah, his father Farooq Abdullah, and Mehbooba Mufti, and politicians like Ghulam Nabi Azad and others should move beyond twitter reactions and join the family in protest on roads.
He said when IGP has himself admitted that Altaf was a civilian and was killed in a crossfire, what prompted him to take “my brother’s body to Handwara for burial.”
“We appeal to the IGP to return to us the body of Altaf and at the same time we seek LG Manoj Sinha’s intervention too into the issue,” he said.