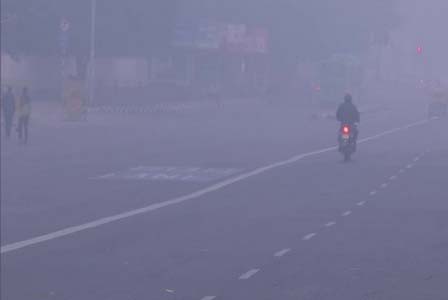 New Delhi, Nov 18: The air quality in the national capital remained in the very poor category with the air quality index (AQI) clocking the value of 344 at 8 am on Thursday, the Central Pollution Control Board (CPCB) data showed.
Though it remained in the very poor category, the AQI improved marginally at 344 on Thursday from its previous day’s index value of 375.
Authorities, however, said no major improvement is likely till Sunday.
According to the CPCB’s Sameer App, Faridabad (354), Ghaziabad (364), Greater Noida (324), Gurugram (325) and Noida (333) also recorded their air quality in the very poor category at 8 am on Thursday.
An AQI between zero and 50 is considered good, 51 and 100 satisfactory, 101 and 200 moderate, 201 and 300 poor, 301 and 400 very poor, and 401 and 500 severe.
The minimum temperature of the national capital was recorded at 10.5 degrees Celsius, two notches below the season’s average, India Meteorological Department (IMD) said.
On Wednesday, the city has recorded season’s lowest minimum temperature so far at 9.6 degrees Celsius, three notches below normal.
The weather office predicted partly cloudy and hazy sky in the day.
The maximum temperature of the day is likely to hover around 27 degrees Celsius, weather office said.
IMD officials said that the relative humidity was recorded at 82 per cent at 5.30 am.
On Wednesday, the maximum temperature settled at 27.4 degrees Celsius. (Agencies)