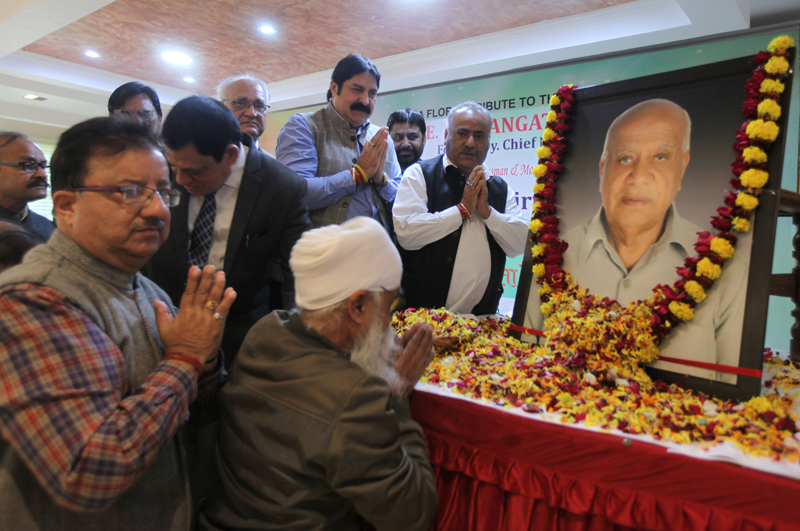 JAMMU, Nov 17: Rich tributes were paid to former Deputy Chief Minister (CM) Pt Mangat Ram Sharma on his 89th Birth Anniversary, here today.
Senior political leaders, social and religious personalities and people from different walks of life attended the function held at a Resort in Shaktinagar Jammu. The function was organized by Pt Mangat Ram Sharma Fan Club through its convener Rajesh Sharma in coordination with the family members of the late leader.

Click here to watch video
Speakers from the political class, social and literally field remembered the great contributions of the veteran leader who was respected widely by the people from all walks of life and played a great role in the politics of Jammu and Kashmir for a long time.
Apart from the family Guru Ashok Ji Maharaj (Jammu Maharaj), senior Congress leaders and other prominent personalities who paid tributes to the former Deputy CM were Mula Ram (Ex Minister), Raman Bhalla (Ex Minister), Ravinder Sharma (Ex MLC), Yogesh Sawhney (Ex Minister), Balwan Singh (Ex MLA), Balbeer Singh (Ex MLC), Girdhari Lal (Ex MLA), Ved Mahajan (Ex MLC), T S Bajwa (Ex MP), Zorawar Singh (chairman Team Jammu), Kanta Bhan (vice-president PCC) and Gurbachan Kumar (Ex Minister).
Speaking on the occasion, Mula Ram remembered the long services of Pt Mangat Ram in the public life and described him a towering personality of J&K who was respected by people of all regions and religions irrespective of caste, creed or color. Mula Ram said that Pt Mangat Ram was a strong voice of people of Jammu while strongly committed to secular ideology.
Former Minister and vice president PCC Raman Bhalla lauded the services of Pt Mangat Ram Sharma to J&K and termed him a strong pillar of the Congress party who was committed to the welfare of people of all walks of life and pleaded the cause of equitable share to Jammu region while maintaining the unity and integrity of Jammu, Kashmir and Ladakh. He played a crucial role in the main stream politics of the erstwhile state and the country for more than half a century and served the people in different capacities.
Ravinder Sharma remembered the great contributions and leadership qualities of former Deputy CM and described him as a people man, respected by one and all while Yogesh Sawhney described Pt Mangat Ram as one of the tallest leader of Jammu and a strong pillar of Congress party who remained committed to service of people throughout his life and played a vital role.
Rajesh Sharma (son of the late leader) while speaking on the occasion, said, “Pt Mangat Ram Sharma was a great political figure. He was liked and admired by people of different walks of life and ideology because of his leadership quality coupled with humility and humour, apart from care and concern for the poor and downtrodden.”
The programme, which was conducted by Rajesh Sharma and Sanjeev Dubey (Congress leader), concluded with vote of thanks presented by Rajnish Sharma (treasurer JKPCC).