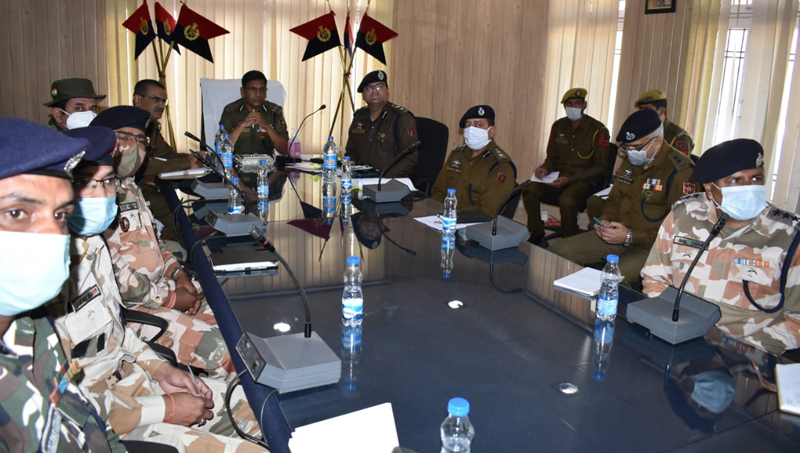 JAMMU, Nov 16: Additional Director General of Police (ADGP) Jammu Zone Mukesh Singh on his two day extensive tour of Rajouri and Poonch reviewed the present security scenario in both the districts.
After discussion with both district SSPs, necessary direction were issued to both on security and crime related matters.
ADGP Jammu was accompanied by DIG Rajouri-Poonch Range Vivek Gupta and other senior police officers.
ADGP also held meeting with officers from Civil, Police, Army and CAPF deployed in the district. The Intelligence agencies apprised about present security scenario in the border districts.
During the meeting, ADGP Jammu Zone emphasized on the collective measures to tackle security situation and subversive acts by the terrorists and their masters across the border. He stressed upon all officers to put in place effective measures for maintaining peace and order in coordination with CAPFs with special emphasis on counter terrorism operations in view of the recent encounters in Poonch and Rajouri.
He said that Pak sponsored elements are time and again making attempts to damage growing peaceful atmosphere here. He said that these evil attempts would be dealt with fortitude. He stressed for enhanced security measures and proactive CT operations to neutralize the terrorists present in both districts.
The officers were directed to keep close surveillance over the activities of OGWs, mischief mongers and miscreants so that law and order is maintained at all cost.
He also emphasised to be vigilant on the border to prevent infiltration attempts. Reactivation of Border police posts was another point emphasised upon.
ADGP Jammu Zone urged DIG Rajouri-Poonch Range, SSP Rajouri, SSP Poonch and other territorial officers to continue their good work and make further efforts to strengthen Police-Public relation in the area.