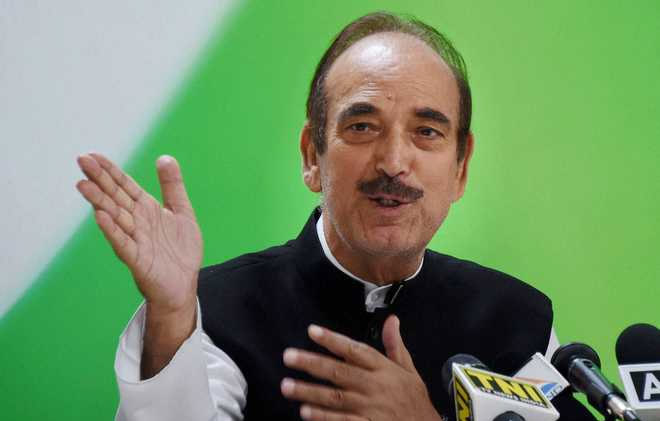 Nishikant Khajuria
JAMMU, Nov 16: In a significant political development amid speculations that Assembly elections in Jammu Kashmir Union Territory may be announced soon, several senior Congress leaders having allegiance to Ghulam Nabi Azad, are learnt to have resigned from respective party positions and raised banner of revolt against the incumbent PCC president.
According to the reliable sources, these senior Congress leaders from Jammu as well as from Kashmir valley, former Ministers and Legislators, have submitted their joint resignation from all posts in protest against not providing them opportunity of being heard about the party affairs in the Union Territory.
The resignation has been addressed to AICC president Sonia Gandhi and copy of the same was also forwarded to Rahul Gandhi as well as Rajni Patil, AICC Incharge Secretary for J&K, sources added.
Prominent among those, who have submitted the resignation, included G M Saroori, Jugal Kishore Sharma, Vikar Rasool, Dr Manohar Lal Sharma, Ghulam Nabi Monga, Naresh Gupta, Subash Gupta, Amin Bhat, Anwar Bhat, Inayat Ali and others.
Except former Deputy Chief Minister Tara Chand, almost all the Azad loyalists in Jammu and Kashmir Pradesh Congress, have submitted their resignations from the party positions, sources said.
In the resignation letter, sources disclosed, these leaders have alleged that under the presidentship of G A Mir, Congress is heading towards disastrous situation and till today, around more than 200 top Congress leaders, including former Minister, MLAs, MLCs, PCC office bearers, District Presidents and AICC Members have resigned from the Congress and joined the other parties while some of them have chosen to remain in silent mode.
These Azad loyalists have further alleged that “some un-scrupulous sycophants have captured and highjacked the functioning of PCC. Party posts were distributed without consultation of senior leaders and sitting MLAs / MLCs of the Districts which resulted that incapable and tainted with doubtful turpitude were/ are installed.”
Pointing out that all elections one after another, may be Parliament, DDC, BDC, Panchyats and Urban Local Bodies, Congress lost and could not form even a single Council in Jammu and Kashmir, these leaders have reminded the party high command that even G A Mir himself lost in the Parliament polls and his son in the DDC elections despite combined PAGD candidate in his home constituency.
The rebellious leaders have claimed that they repeatedly sought to apprise the top party leadership about all this and for retrospection in the Pradesh Congress functioning, but no time was given to them.
“We have been requesting for appointment from the party leadership for the last about one year through the medium of memorandum/ regulations and by way of personal requests too on the maiden visit of Rahul Gandhi both at Srinagar and Jammu during August 2021. But no time was given to us. The matter was also brought into the kind notice of Rajni Patil, but sorry to say that no heed was paid,” explained the rebels, adding that the party has absolutely reduced and on each passing day political space is shrinking.
On the other hand, they said, elections may be announced at any time and in such a collapsed and hired structure displayed through managed digital mechanisms by G A Mir, others are trying to capture the vacant space for which we have been crying, but to our dismay nobody is ready to hear the genuine grievances of the ground situation.
“In view this hostile attitude adopted by the party leadership, we have been compelled and forced to resign from all the party posts being carried. As such it is most humbly request to please accept our resignation,” read the letter.