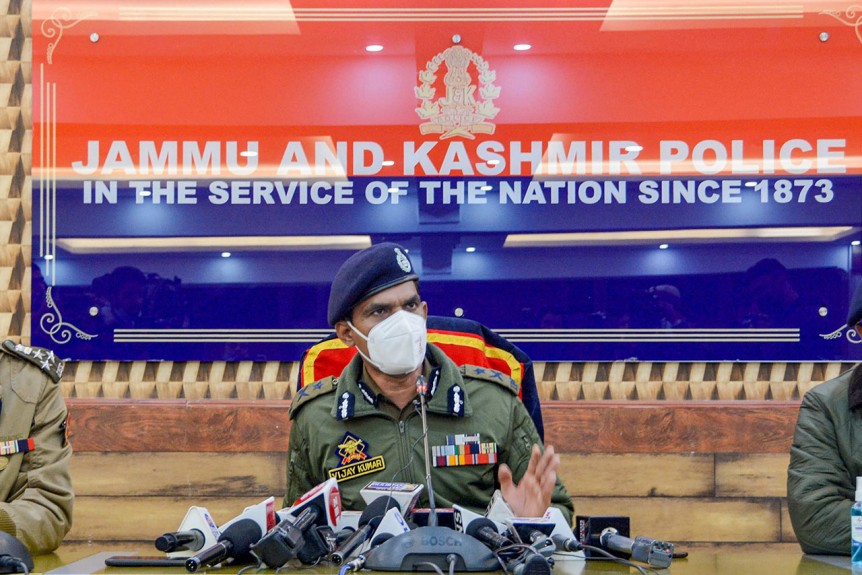 SRINAGAR, Nov 16: Four persons comprising a foreign terrorist and his local associate, an Over Ground Worker and a man who owned the building they used as a hideout, has been killed in Hyderpora in uptown Srinagar, Inspector General of Police (Kashmir) Vijay Kumar on Tuesday said.
He also clarified that the building owner was killed in a ‘cross fire’ during the encounter on Monday evening while the fourth person was an OGW, who had provided his rented space to Haider for using the same as militant hideout.
Addressing a press conference at the Police Control Room (PCR) Srinagar, the IGP Kashmir said Monday evening police received a tip off about the presence of militants near the national highway in Hyderpora.
Police, CRPF and the army laid a cordon and when the security forces were supposed to storm the spot where terrorists were hiding, they fired indiscriminately at the forces, the IGP said.
He said in the ensuing gunfight, two terrorists including a foreigner identified as Haider and his local associate possibly from Banihal area of Jammu were killed. We have called a family from Banihal to identify the slain, the IGP said.
Kumar said the building owner, Altaf Ahmed, was killed in the crossfire. It is not sure whether the terrorist’s bullet or the bullets fired by forces hit him. Terrorists were carrying pistols and it would be clear after investigations whose bullet hit him, the Kashmir police chief said.
He said the fourth person killed was, Mudasir Ahmed, who was living as a tenant in the building. He had provided shelter to Haider and his associate.
This way he was harboring militants. Mudasir was also involved in ferrying Haider from the recent attack site of Jamalata Srinagar where a police man was injured, the IGP said.
Mudasir was also involved in ferrying militants from South and North Kashmir areas, Kumar added.
He said that from the encounter site, two pistols, two magazines, half-a-dozen mobile phones and a few computers were recovered.
Fourth slain Mudasir was also running a call centre. This way, he was an OGW and was directly involved in harboring militants, IGP Kumar said.
As there was an apprehension of law and order situation, mortal remains of Altaf Ahmed was not handed over to family for last rites yet.
He said before giving rooms or building on rent, owners must get in touch with police and share details of tenants. Asked whether police had clear evidence of Mudasir being involved in harbouring militants, the IGP said they had digital evidence and once they get further proof, it will be shared with the media.
Kumar in a late night tweet said: “#The house owner who was injured in terrorist fire, succumbed to his injuries .#Terrorists have been hiding on top floor of his building. As per source and digital evidence, he has been working as a #terror associate. Search is still going on.”,
On Monday three dead bodies were recovered from the encounter site, one of whom was identified as Sameer Tantray, a militant and resident of Tral in Pulwama district.
He also told about Amir a hybrid militant from Banihal in Qazigund district and an associate Altaf who is running a cement shop at Hyderpora.
The daughter of Altaf Ahmad who was also killed in the encounter alleged that security forces shot dead her father.
She said “not a single shot was fired from inside the house as there was no presence of any militant”.
“Security forces killed innocent people,” she said.
She said Mudasir Gul, a dental surgeon was a witness of the entire episode who was also shot dead by the security forces for no fault of his, she added.
She said her father was told by the security forces to accompany them to the top floor of the house a couple of times. When the security forces did not get anything they shot him dead, she alleged.
She appealed to the authorities to hand over the body of his father to perform his last rights. She said security forces did not hand over the body. To whom we should appeal, she wanted to know.
An SIT has been constituted which would be headed by the DIG to probe the modus operandi of “Hi-tech Hyderpora hideout”, Kumar said.
He said the team will also investigate sequences of events that led to the killing of the building owner, militant associate, and computer links with foreign countries. (Agencies)