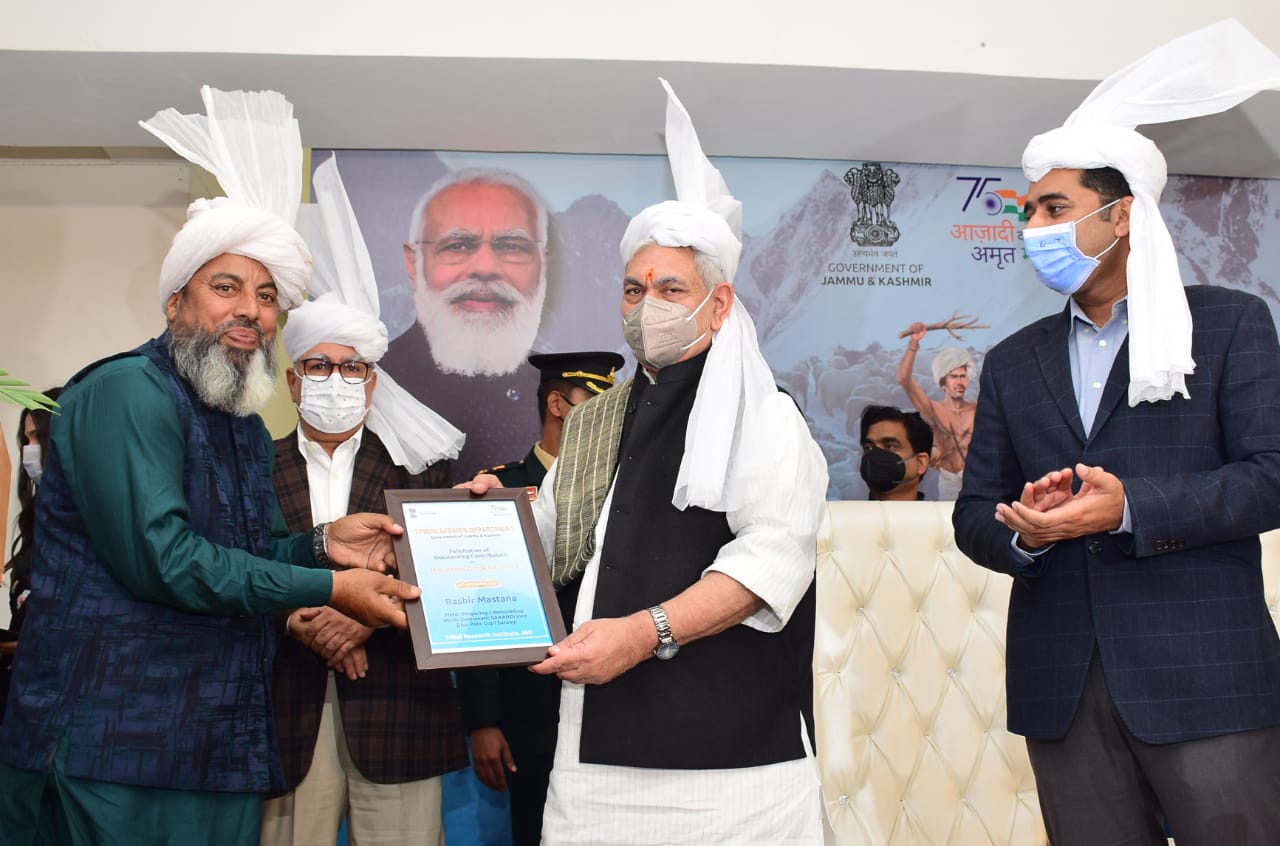 JAMMU, Nov 15: Lieutenant Governor Manoj Sinha today participated in the first Janjatiya Gaurav Diwas to mark the celebration of Birsa Munda’s birth anniversary, at Kala Kendra.
Speaking on the occasion, the Lt Governor said that the sacrifices and contribution of the Tribal community in our independence struggle are immense, incomparable and invaluable.
The Lt Governor said that under the guidance of Hon’ble PM, J&K UT is empowering those who were discriminated against since ages. “Apart from implementation of forest rights act, we are making endeavours for socio-economic development of Scheduled Tribes through special educational, infrastructure and livelihood schemes”, he added.
The Lt Governor observed that emphasis is being laid on empowering Tribal community so that they can live a life of self respect and dignity. J&K is transforming on an unprecedented scale and speed. Improving people’s living standards, reforming rural & urban infrastructure and unlocking potential of women and youth from marginalized sections is our top-most priority, he said.
Participating in the celebrations of Janjatiya Gaurav Diwas, the Lt Governor gave his best wishes to all the tribal entrepreneurs and personalities associated with art, culture and literary world present on the occasion.
Underscoring the need to make the young generation aware about the sacrifices and struggle of tribal freedom fighters, the Lt Governor said that along with Bhagwan Birsa Munda, heroes such as Rani Gaidinliu, Alluri Sitharama Raju, Komaram Bheem, Shankar Shah, Raghunath Shah, Khajya Nayak, Sitaram Kanwar, Bhima Nayak and many other made supreme sacrifices for the tribal community and gave immense contribution for a new India.
The Lt Governor also remembered Mali Begum of Poonch who had saved the border district from falling into the hands of enemies in the 1971 war, and 1965 war hero Mohammad Deen Jagir, who was awarded the Padma Shree by the Government of India.
The Lt Governor said that Hon’ble Prime Minister has extended equal rights to a large population of Tribal community in Jammu and Kashmir through his historic decision to implement Forests Rights Act 2006.
The Lt Governor mentioned about transit accommodations being established at eight place at the cost of Rs 28 crores with facilities of medical camp, extra tents, animal sheds etc; Tribal Health Plan worth Rs 8 crores; 500 youth to be selected for advance training like pilot, robotics, management; arrangements for 1521 Seasonal School, etc.
The Lt Governor called on the new generation to take inspiration and follow the path of their tribal ancestors who made contributions, sacrifices and served the tribal society, imbibing the values of their culture and rich heritage with a true heart. He also urged all the thinkers and artists of the society to come together with the Tribal Department to further enrich the tribal cultural heritage.
Meanwhile, the Lt Governor inaugurated a Photo exhibition on “Tribal Communities of J&K”, an exhibition displaying “Various Tribal Arts and Crafts”. He also felicitated eminent artists, laureates of Tribal art & literature, and Tribal entrepreneurs on the occasion. The Lt Governor handed over vehicles under the Mumkin scheme to tribal youth.
Farooq Khan, Advisor to Lt Governor, while speaking on the occasion said that the Lt Governor has been personally monitoring the developmental activities and plans for empowering the tribal youth in particular and the community in general.
Javed Rahi, renowned scholar, author, and tribal social reformer, while addressing the gathering threw light on the contributions of tribal leaders to national freedom struggle, as also the achievements of local tribals in various fields.
Shahid Iqbal Choudhary, Administrative Secretary, Tribal Affairs Department delivered the welcome address and presented vote of thanks on the occasion.
Anshul Garg, Deputy Commissioner Jammu; Musheer Ahmed, Director Tribal Affairs, J&K, besides various tribal leaders, prominent personalities and a large number of members from the Tribal community and people from all walks of life attended the celebrations.