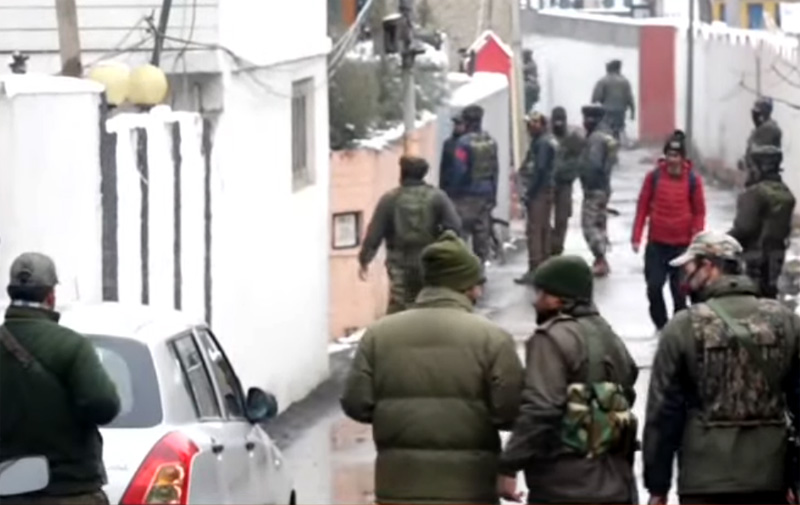 Srinagar, Nov 12: A militant commander of Hizbul Mujahideen was killed in an overnight gun battle in Kulgam district of South Kashmir taking the tally of killed militants in two separate encounters since last night to three while a militant was arrested in Ganderbal district today.
A police spokesman said that acting on specific inputs provided by Kulgam and Srinagar police regarding the presence of militants in Kulgam and Srinagar, two operations were carried out in which three militants were killed, include district commander of Hizbul Mujahideen.
In village Chancer Chawalgam area of Kulgam district, a joint cordon and search operation was launched by Police, 9RR and 18Bn CRPF after inputs about the presence of militants in the village.
The spokesman said that militants were given opportunity to surrender. However, they fired indiscriminately upon the joint search party. “The joint teams ensuring safety of civilians rescued and shifted all the civilians to safer places.  The fire was retaliated leading to an encounter”, he said. Click here to watch video
In the initial exchange of fire, although one militant was killed, but due to darkness the operation remained suspended throughout the night.
In the wee hours, police said, repeated announcements were again made to the hiding militants to surrender, but they again fired on joint search party which was retaliated leading to the elimination of another militant. The dead bodies of both the killed terrorists were retrieved from the site of encounter.
They have been identified as district commander Hizbul Mujahideen Shiraz Ahmad alias Shiraz Molvi alias Abu Haris, resident of Souch Kulgam and Yawar Ahmad Bhat, resident of Ponipora Kulgam.
As per police records, both of them were part of groups involved in several militancy related incidents including attack on security forces and civilians.
Shiraz Molvi who was most wanted militant in South Kashmir was active since year 2016. He was also involved in recruiting innocent youth into militancy and in killing civilians as well as political workers in Devsar and Brazloo areas of Kulgam. There were 15 FIRs registered against him for his involvement in militancy related incidents.
In another operation, police said that acting on specific input about possible militant attack and movement of militants in Bemina area, a joint checkpoint was established to thwart his designs.
The spokesman said that milintants attacked a checkpoint established near Bund in Bemina area which was retaliated leading to an encounter. “The further reinforcement was rushed to the spot, 2RR and Valley QRT CRPF also joined the operation.  In the ensuing encounter, one militant of Mujahideen Gazwatul Hind was eliminated and his body was retrieved from the site of encounter. He has been identified as Amir Riyaz resident of Khrew Pampore”, he added.
The spokesman said that he was relative of one of the accused in Lethpora attack and preliminary investigation indicated that he was assigned to carry out similar kind of Fidayeen attack. Digital evidences recovered from his mobile showed that he was prepared for Fidayeen attack.
“Incriminating materials, arms and ammunition including one AK-rifle and a pistol were recovered from Kulgam encounter site and one AK-rifle from Bemina encounter site was also seized. All the recovered materials have been taken into case records for further investigation. Police have registered cases under relevant Sections of law and investigations have been initiated”, police said.
Inspector General of Police Kashmir Vijay Kumar congratulated the joint teams for carrying out both the operations in professional manner resulting in elimination of three militants including a most wanted militant commander.
He said that 133 militants including many top commanders were killed this year.
Police in the meantime arrested a militant of The Resistance Front (TRF) in Ganderbal district today.
Police said that on 11th November, a police party of Ganderbal Police that had established a MVCP near Khann and it observed a suspicious movement close to the MVCP. The man was challenged who instead of complying tried to flee.
He was overpowered and apprehended and was later identified as Arshad Ahmad Mir, son of Mohammad Subhan Mir resident of Sehpora, Ganderbal.
A case   (FIR No 211/21 U/S 13, 39 of ULA (P) ACT and 7/25) of Arms Act was registered in Police station Ganderbal and investigation set into motion.
“During sustained questioning, individual was found as a staunch militant associate of Lashkar-e-Toiba/TRF whose name had surfaced during earlier investigations also”, police said.
The preliminary investigation has found him involved in recruitment of his own brother Lateef Ahmad Mir arrested in FIR 57/21 u/s 13, 39 ULA (P) Act & 7/25 Arms Act of police station Kheer Bhawani. He is involved in motivating and facilitated recruitment.