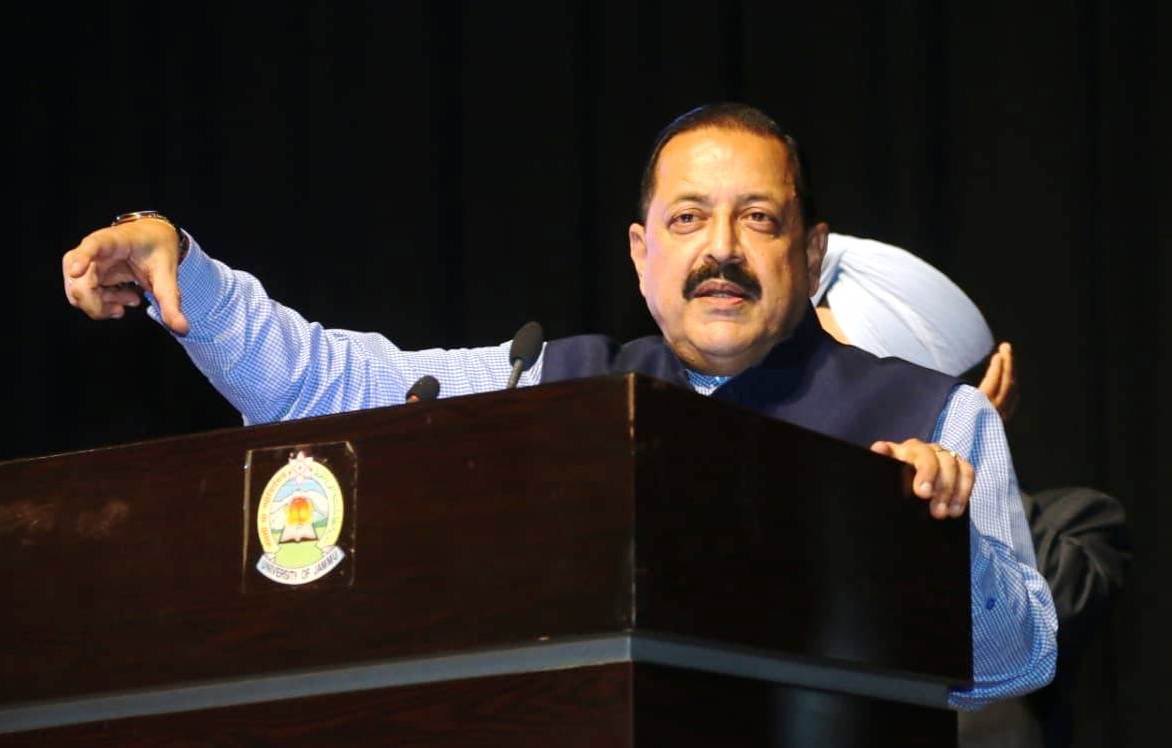 JAMMU, Nov 13 : Union Minister Dr Jitendra Singh said here today that 21st century opportunities can’t be availed with 20th century mindset. For the youth who have active years ahead, it is important to cultivate the right mindset to be able to avail of the amazing new opportunities unfolding in 21st century India, he said.
Delivering the Keynote address at a Seminar cum Interactive Session on the theme “Youth Contribution to India @ 100” organised by the University of Jammu at Zorawar Singh Auditorium here today to mark “Amrit Mahotsava”, Dr Jitendra Singh said that unless the mindset is reoriented, new avenues will not yield optimum outcomes. In the highly aspirational India of today, the current Mantra for the youth is “Aspire,Innovate and Compete”, he said.
Dr Jitendra Singh said, no government in the world can provide a government job to every youth but a responsible government like the one headed by Prime Minister Narendra Modi has undertaken several initiatives to provide avenues of livelihood which are even more lucrative than a government job. But to avail of these avenues, the youth need to liberate their mindset from the clutches of government job. For this, he said, the parents also need to be educated and at the same time, the politicians and leaders also need to restrain themselves from giving false assurances of government jobs.
India is passing through the 75th years of its independence and it is time to lay down the road map for the next 25 years before independent India turns 100, Dr Jitendra Singh said. It is a proud privilege and opportunity for the youth of India today to be able to contribute to the making of India when it turns 100 in 2047 and stands as a frontline nation in the world community.
The greatest advantage for the youth today, said Dr Jitendra Singh, is that under the leadership of Prime Minister Narendra Modi, India has made rapid strides which the entire world acknowledges and today India is seen as a force to reckon with. Prime Minister Narendra Modi has been universally and unanimously acknowledged as the most influential and popular Head of State anywhere in the world, he added.
Every generation of youth, said Dr Jitendra Singh, has a contribution to make and the nature of this contribution is determined by the era in which he is born and the mindset through which the nation is going through. Therefore, he said, at the time of independence the youth of that era were entrusted with the challenge of sustaining the independence of India and stabilizing it as a progressive democratic nation at a time when several democracies of the world were collapsing and the Prophets of doom including including Sir Winston Churchil had predicted that India as a democracy did not have the capacity to survive even for 50 years. Today, on the other hand, the youth of 2021 owes the responsibility of sustaining what India under Prime Minister Narendra Modi has achieved in the last 7 years and made up for the lapses of the past 70 years, he said.
Describing the Indian youth today as privileged one, Dr Jitendra Singh said, they have the unique opportunity to contribute the next active years of life to the making of india @ 100 and to be able to tell their children that they too were, to a bigger or a smaller extent, architects of new India at 100.
Dr Jitendra Singh said, today India is already ahead of all other nations in space technology, innovation, bio technology and COVID has established our enormous capacity not only by coming up with the first ever DNA vaccine but also manufacturing enough Vaccine to export to other countries. The next 25 years will therefore expect the youth of this generation to establish the insurmountable supremacy of India for the following generations to come, he added .
The presentation by Dr Jitendra Singh was followed by a lively interaction which lasted nearly two hours and in which scholars, students and researchers from different departments and streams participated. Dr Jitendra Singh responded in detail to each of the participants and described the interaction as a highly enriching and mutually learning experience.
Vice Chancellor of Jammu University, Professor Manoj Kumar Dhar delivered the Welcome Address while Professor Naresh Padha presented the Vote of Thanks. Professor Rajni Dhingra also spoke on the occasion. The interactive session was compered and conducted by Rajni Sharma.