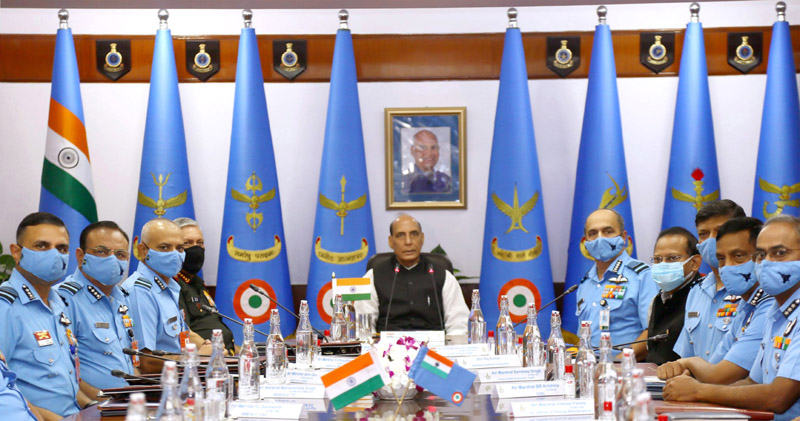 *IAF chief briefs DM on readiness to meet with situation

JAMMU, Nov 10: In a strategically very significant statement, Defence Minister Rajnath Singh today called for maintaining high level of preparedness and ability to respond on a short notice by the Armed Forces.
The statement comes at inaugural address of three-day second bi-annual IAF Commanders’ Conference in New Delhi which among others was also attended by Chief of Defence Staff (CDS) Gen Bipin Rawat, Secretary Defence Production Raj Kumar and Chief of Air Staff Air Chief Marshal VR Chaudhari
A Defence spokesman said the Defence Minister appreciated the IAF for maintaining high level of preparedness, ability to respond on a short notice and displaying high standards of professionalism in carrying out operational and peace time tasks.
Referring to volatile situation prevailing along the borders, Rajnath said that the Armed Force need to be prepared to respond at a short notice for any contingency.
Though he didn’t refer directly to the situation prevailing along Line of Actual Control (LAC) in Eastern Ladakh, the reference was obvious as the Indian Army is engaged in standoff with China for past nearly one and half years and the Indian Air Force has also been maintaining very high alert keeping strict vigil on the situation at all the places where India shares boundary with China.
Chief of Air Staff Air Chief Marshal VR Chaudhari briefed the Defence Minister on current status of the Indian Air Force including its preparedness to meet with any kind of situation along the borders especially with hostile neighbours of China and Pakistan.
“The role of Indian Air Force in future conflicts is crucial and it needs to harness the capabilities and opportunities offered by AI, Big Data Handling and Machine Learning,” Rajnath said.
He said that enhancing jointness is essential and that inputs from all stakeholders would be taken into consideration for the new structure.
The Commanders of the IAF will carry out a comprehensive review of India’s security challenges along the borders with China and Pakistan at the conference.
Expounding on theaterisation, he mentioned that enhancing jointness is essential and the structure should be evolved after closely examining various options, and inputs from all stakeholders would be taken into consideration.
The armed forces are likely to firm up by the middle of next year a roadmap for rolling out the Theatre Commands that are expected to ensure optimum utilisation of the military resources and enhance India’s war-fighting capability.
According to the plan, each of the theatre commands will have units of the Army, the Navy and the Air Force and all of them will work as a single entity looking after security challenges in a specified geographical territory under an operational commander.
Recently, the department of military affairs (DMA) asked the three services to complete their studies on the proposed theatre commands by April so that the plan to create the new structures can be expedited.
The Defence Minister also highlighted efforts in the field of indigenisation of military hardware through ‘Make in India’ initiative and said it is showing results.
He said the orders of Light Combat Aircraft Tejas Mk 1A and C-295 transport aircraft will open new opportunities in the indigenous aerospace sector.
In September, India signed a nearly Rs 20,000 crore contract with Airbus Defence and Space to procure 56 C-295 transport aircraft to replace the Avro-748 planes of the IAF.
Under the agreement, Airbus will deliver the first 16 aircraft in “fly-away” condition from its final assembly line in Seville, Spain. The subsequent 40 aircraft will be manufactured and assembled by Tata Advanced Systems (TASL) in India as part of an industrial partnership between the two companies.
Rajnath also exhorted the commanders to brainstorm to evolve viable solutions towards the theme of the conference, ‘Ensuring Certainty amidst Uncertainties’.
In his address, the Chief of Air Staff emphasised on the need to develop multi-domain capability in order to give a swift and befitting response to any misadventures by India’s adversaries.
He also emphasised the need for joint training with the Indian Army and Indian Navy to enable synergised application of combat power in future conflicts.
Air Chief Marshal VR Chaudhari complimented all the Commanders for maintaining a high state of readiness despite challenges posed by the pandemic, the IAF said.
“Uncertainty in the geopolitical landscape makes it an imperative for the armed forces to train, equip and adapt to rapid changes,” the IAF said.
It said the Commanders will discuss and brainstorm situations that may affect national security and focus on measures to enhance operational capability.
“Issues pertaining to strengthening training and optimising human resources policies for effective utilisation of manpower will also be discussed,” it added.