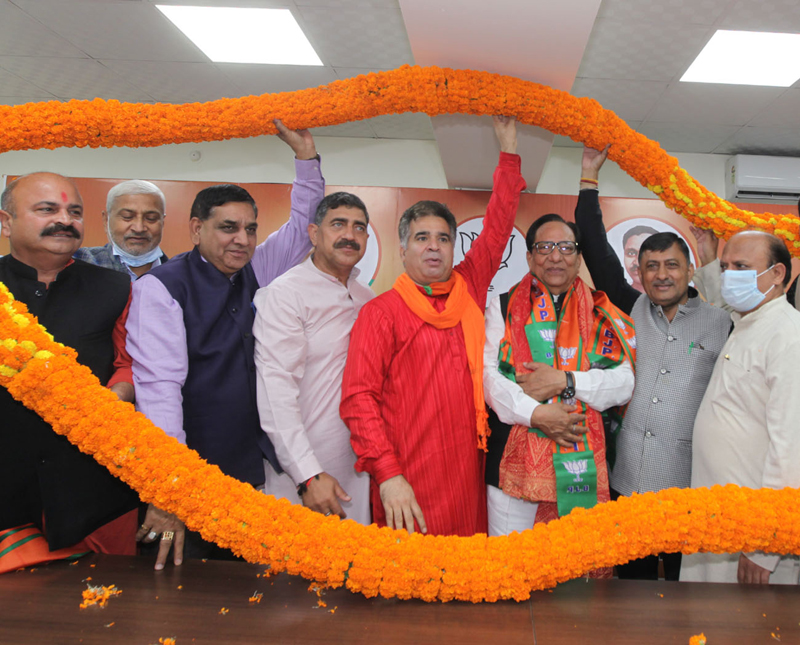 JAMMU, Nov 10: BJP received another shot in arm after former president of Jammu Chamber of Commerce & Industries (CCI) and senior Congress leader, YV Sharma along with his supporters, joined the party here, today.

Click here to watch video
He joined the party in presence of its JK UT president, Ravinder Raina, MP (Lok Sabha) Jugal Kishore Sharma, Mayor JMC Chander Mohan Gupta and other senior leaders.
Ravinder Raina, while welcoming the new entrants said that BJP is the best platform to serve the nation and society with selfless efforts. He praised YV Sharma for his untainted efforts in raising the issues of Jammu especially his role in Central University of Jammu. He said that BJP is of the firm view that YV Sharma will give his best efforts for the development in the region without any prejudice, while he will work for the extension of the party activities in the region.
Raina said that earlier, J&K BJP ensured the rights to buy and sell agricultural land to Mahajans, Khatris and Sikhs by taking up the issue at every administrative level and assured the residents of Apsara Road, Gandhi Nagar that no injustice will be allowed to be done to them.
Jugal Kishore Sharma said that due to strong leadership of Prime Minister, Narendra Modi and other Central leadership, today everybody is keen to join the BJP. He said that BJP welcomes all with the open arms into the family.
YV Sharma assured the senior party leadership that he will work in accordance with the party principles and especially for the business community of the region.
Prominent businessmen TR Gupta, Onkar Nath Sharma, Yash Paul Gupta, Reen, Dinesh Koul, Subhash and others from business community were also present on the occasion.
BJP vice-president, Yudhvir Sethi conducted the proceedings. Yudhvir Sethi. Party vice-president, Sham Lal Sharma, general secretaries Vibodh Gupta and Dr. Devinder Kumar Manyal, BJP NEM & Headquarter incharge, Priya Sethi, district president, Vinay Gupta, office secretary Tilak Raj Gupta, media secretary, Dr. Pardeep Mahotra, additional publicity secretary, Ayodhya Gupta, Library incharge, Kulbhushan Mohtra and other senior leaders of the party besides were also present on the occasion.
It is worth to mention that Y V Sharma an eminent trade leader, social activist and a man of great integrity has been in public life for the last over 30 years. Hailing from a reputed business family of Jammu having business spread over the whole province, he is a post graduate and a Business Management Diploma holder from University of Jammu.
Associated with CCI Jammu right from the start of his business career, he has championed the cause of traders, commerce and industry twice as the general secretary and thrice as the president of the Chamber.