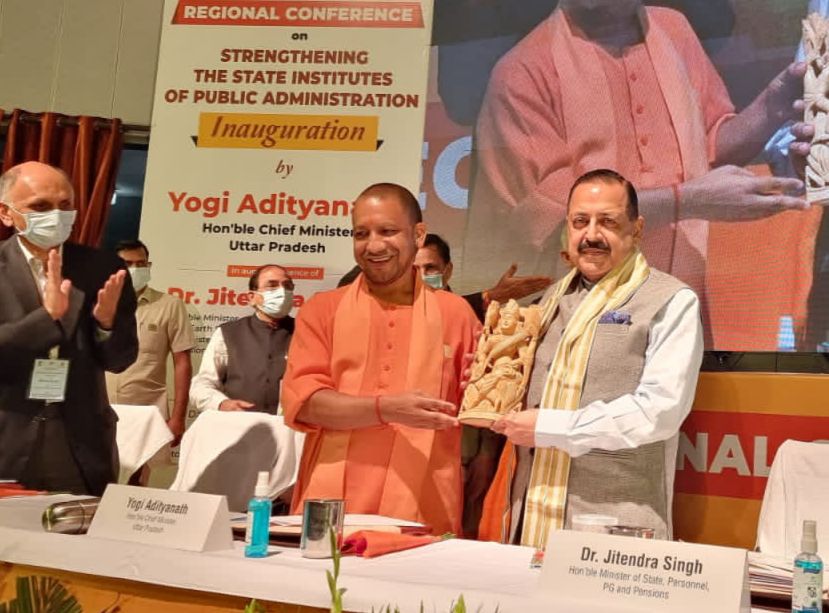 LUCKNOW, Nov 11 : Union Minister Incharge Department of Administrative Reforms and Public Grievances (DARPG), Dr Jitendra Singh today announced setting up of District level Governance Index in the State of Uttar Pradesh, on the lines of the National Good Governance Index.
Inaugurating the two-day Regional Conference on the theme “Strengthening the State Institutes of Public Administration”, along with Chief Minister of Uttar Pradesh Yogi Adityanath, Dr Jitendra Singh said, DARPG will collaborate with the State Govt in establishing District Good Governance Index, first of its kind for any State, for improving governance at the district level.
Yogi Adityanath, in his address, appreciated Department of Administrative Reforms & Public Grievances (DARPG) for holding regional Conference in Uttar Pradesh. Referring to theme, he said, it would strengthen the State Public Administration Institutes and empower the State Civil Servants in bringing development in the State and country.
Dr Jitendra Singh said, the Good Governance Index UP can later be replicated in other States also as the main Mantra of the Modi Government is to reach out to the last man in the last queue with all the benefits of the welfare schemes.
The Minister also announced that DARPG will collaborate with the UP Government for integration of CPGRAMS with district portal of Uttar Pradesh which will enable citizens to lodge complaint from a single portal. One National One Portal is the goal and toward this end integration of CPGRAMS with State Grievance Portals will play an important role in redressal of grievance, he added.
Dr Jitendra Singh said, the Conference is an effort to create a common platform to share experiences in the formulation and implementation of best practices in administrative training, capacity building to facilitate citizen centric governance, improved public service delivery through e-Governance, transparent, accountable and citizen-friendly effective administration.
Referring to the National Program for Civil Services Capacity Building — Mission Karmayogi, Dr Jitendra Singh said, it has been termed as the “biggest” human resource development programme which will give bureaucrats the opportunity to improve their performance on a continuous basis. “Mission Karmayogi aims to prepare Civil Servants for the future by making them more creative, constructive and innovative through transparency and technology.” He said, the new tools of information technology, Artificial intelligence and digital mapping should be used as repository of knowledge and data that could be handy in problem solving and devising new approach for administrative intervention and training module.
Dr Jitendra Singh informed that Capacity Building Commission (CBC) is working in direction of creating ‘Common Shared Resources’ for the training institutes and the concept of ‘Faculty’ is being relooked to include Young Achievers, Women Speakers, successful Starts- Ups as guest faculty in Central Training Institutes, CTIs. He also highlighted the role of training in public administration and said it is essential not only for efficiency of administration but also for broadening the vision of the official.
The guests, delegates and the participants were given a warm welcome by Sanjay Singh, Secretary, Administrative Reforms & Public Grievances, Govt. of India who also highlighted the need to organize such events as part of the initiatives to share Good Training practices and administrative innovations carried out in different parts of the country and need to replicate these Good Training and Governance Practices and Innovations. He also mentioned that Regional conferences on various themes were being organized in various parts of the country and our experience so far has been that these conferences are an excellent forum to generate awareness about training practices, administrative reforms and new developments in various States in this area.
Rajendra Kumar Tiwari, Chief Secretary, Uttar Pradesh thanked DAR&PG for holding the regional conferences at Lucknow and bringing together different stakeholders. He highlighted some good training practices being followed in Uttar Pradesh.
The Chairman, Capacity Building Commission (CBC), Adil Zainulbhai said on the occasion that CBC is conducting a survey on the content and infrastructure by covering 6-7 departments and 350 CTIs.
The Vote of thanks was presented by Devesh Chaturvedi, Additional Chief Secretary, Uttar Pradesh.
The senior officers from DAR&PG namely V. Srinivas, Special Secretary and NBS Rajpur, Joint Secretary and from DOPT, Rashmi Choudhary, Additional Secretary; LBSNAA, DG, Srinivas R. Katikithala; from Capacity Building Commission Adil Zainulbhai, Chairman; Dr. R. Balasubramnaym, Member; Praveen Pradeshi, Member; Hemang Jani, Secretary; from IIPA, S. N. Tripathi, Director General; all ATIs & CTIs and 350 officials from Uttar Pradesh participated in the inaugural session.