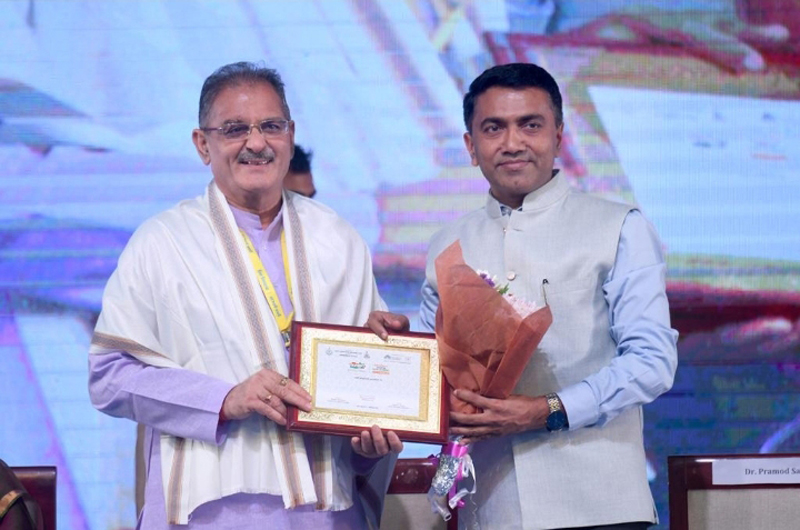 JAMMU, Nov 10: It is essential that young people are engaged in formal political processes and have a say in formulating today’s and tomorrow’s politics to create a stable and peaceful society.
This was stated by senior BJP leader and former Deputy Chief Minister, Kavinder Gupta while speaking at National Youth Parliament, organized under the programme Goa@60 celebrating Democracy in the 60th year of Goa’s Liberation and 75th Year of India’s Independence by the State Legislative Assembly Goa. The event was hosted by the Government of Goa.
On the occasion Chief Minister, Goa, Pramod Sanwant presented a certificate of honour to Kavinder Gupta.
“Due preference given to young blood in today’s political arena will have long lasting effects in developing policies that respond to the specific needs of younger generations. It is necessary that for young people to be adequately represented in political institutions, processes, and decision-making, in particular in elections because through this they can acquire the knowledge and capacity to participate in a meaningful way at all levels in nation building”, Kavinder said.
He said that the quantum of energy which the youth has and the innovation which it can bring in the political set-up of the country needs to be utilized to the hilt to change the contours and dimensions of India as far as the development aspirations of the new India are concerned thus making it utmost necessary to include youth in the political process.
The former Deputy Chief Minister said that whatever the country is accomplishing right now is ultimately meant for today’s youth and therefore the core principle for meaningful and effective youth political participation needs to be – ‘nothing about them without their conviction and consent’. He said it is imperative that youth should steer the politics towards new heights as the energy level which they possess is enormous and if given the chance they can do wonders by their meaningful attributes and maverick ideas.
Kavinder said that already youth has proven at many times that their youthfulness can be a game changer therefore making them facilitators of different political spectrums can without an iota of doubt help the country to surmount many of the existing problems.