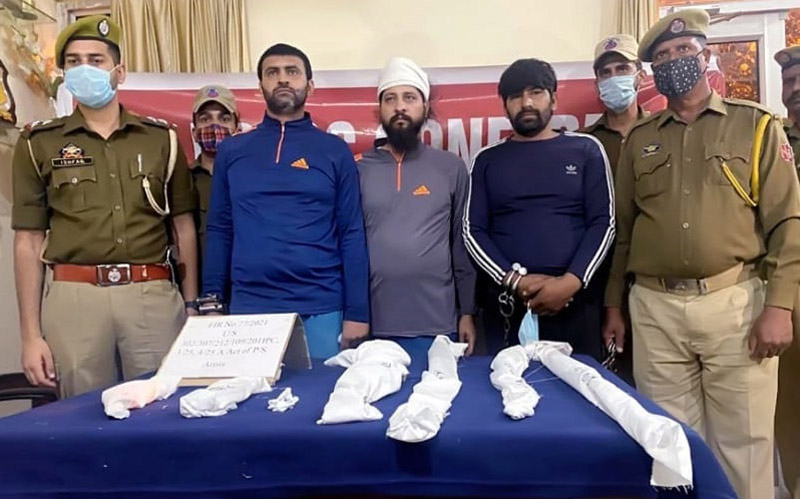 JAMMU, Nov 10: A suspended cop and his former colleague, who were wanted in connection with last week’s shooting incident in Salehar area of Arnia, were arrested from Kathua district. Police also arrested a notorious criminal for harbouring these accused.
This was informed the Senior Superintendent of Police (SSP) Jammu Chandan Kohli.

Giving details, SSP said that a firing incident took place on 5th November 2021 in which four persons received bullet injuries out of which two died on the spot while the third person succumbed to his injuries at GMC Jammu. After the incident, the accused fled from the spot and dumped the weapon of the offence in a hideout.
“On this, a case FIR Number 77/2021 under Sections 302 and 307 IPC, 3/25 and 4/25 Arms Act got registered in Police station Arnia and investigation started”, SSP said, adding that for speedy and time bound investigation, a Special Investigation Team (SIT) was constituted which was headed by SP Headquarters Jammu, Ramnish Gupta.
SSP further stated that on 8th November, an information was received that wife of one of the accused Sadeeq Choudhary namely Jaana Bibi had kept the weapon in a hideout. She was questioned thoroughly after which she confessed the crime and led the police party to the hideout and finally the weapon was recovered from there after all legal formalities, Kohli maintained.
“Today morning, a reliable information was received by Special Investigation Team and 3 teams were constituted under SDPO RS Pura Shabir Khan comprising of SHO Arnia Inspector Harjeet Singh, SHO RS Pura Inspector Jaipaul Sharma and SHO Miran Sahib Inspector Sultan Mirza, which finally zeroed in on accused in the outskirts of Kathua and finally arrested them along with one of their accomplice with the support of Kathua Police. This has been done under the supervision of SP Headquarters Ramnish Gupta”, SSP Jammu Chandan Kohli informed.
“The main accused, who were arrested were identified as Sadeeq Choudhary, son of Naseeb Ali of Arnia, Bhupinder Singh, son of Amreek Singh of RS Pura, both main accused”, SSP said, adding that their associate namely Gulab Din alias Ghaia, son of Mareed Ali of Sarore, who was harbouring them was also arrested.
SSP informed that one revolver along with 10 cartridges was also recovered from the accused Bhupinder Singh, adding that four vehicles used in crime viz Tata Harrier bearing registration number JK02CQ-7308, Mahindra Thar bearing registration number JK21G-9888, Mahindra Scorpio bearing registration number JK02BM-3333 and Chevrolet Beat bearing registration number JK02BA-8375 also stands seized.
“On further questioning of the accused, police raided the house of the accused Bhupinder Singh and recovered three 12 bore guns, some sharp edged weapons, 10 grams heroin and 2 lakh Indian currency”, SSP said and added that subsequently FIR Number 214/2021 under Sections 3/25 and 4/25 Arms Act and FIR Number 215/2021 under Section 8/21/22/ 27 (a) NDPS Act were lodged at Police station RS Pura and FIR Number 79/2021 under Section 8/21/22 NDPS Act at Police station Arnia.
“It is pertinent to mention that one of the accused namely Sadeeq Choudhary was working in Police Department and was dismissed from service and disengaged in year 2019. Moreover, Gulab Din alias Ghaisa who has harboured the accused persons is a notorious criminal and several complaints and FIRs was registered against him in Police Station Bari Brahmana and other Police Stations”, SSP Chandan Kohli said, adding that further investigation of the case is going on.