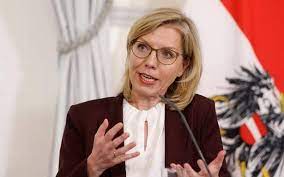 Glasgow, Nov 9:Unlike some of her European colleagues, Leonore Gewessler arrived at the UN climate conference with a clean conscience.
The 27-hour journey by sleeper train from Vienna to Brussels, and then on to Glasgow, Scotland, spared Austria’s climate minister the kind of criticism many VIPs faced for taking planes to a conference that’s all about cutting greenhouse gas emissions.
“Wherever possible, I try to choose the climate-friendly option,” said Gewessler, whose portfolio also includes transport.
Since taking office last year, the Green Party politician has pushed to revive Europe’s once-extensive night train network, which has been cut steeply due to competition from low-budget airlines.
Gewessler said Monday she used her stopover in Brussels to meet other European officials and spent the rest of the 2,000-kilometer (1,240-mile) journey preparing for the climate talks that are reaching their final phase this week.
“Trains and night trains are the future of short and medium-distance travel in Europe,” she said.
Gewessler also recently launched a nationwide climate ticket that allows Austrians to travel the length and breadth of the Alpine nation on any form of public transport for 1,095 euros (USD 1,269) a year — or 3 euros (USD 3.50) a day.
Almost 1,30,000 people have bought a climate ticket in the last few weeks, beating the government’s best expectations.
Gewessler said deciding how they want to travel is every person’s personal choice.
“But I became a politician in order to make it much easier for people in our society to move about in a climate-friendly way too,” she said. (AGENCIES)