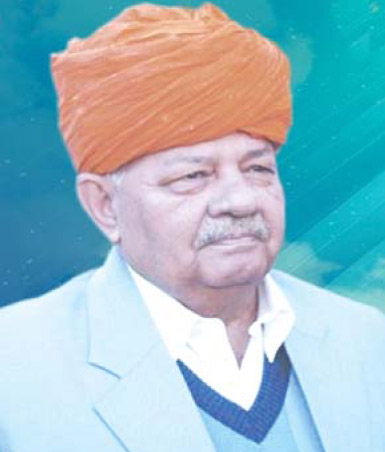 “Hazaroon Saal Nargis Apni Benoori Per Rootie Hain, Badi Muskil Se “Chaman Mein Koi Deedwar ” Chaman Lal Gupta” Jaisa Paida Hota Hain” About six months ago, Jammu lost a great visionary and a popular political leader in prof. Chaman Lal Gupta who remained a professor, industrialist, Parchark , M.L.A , M.P and Union Minister and was one of the most influential enduring icons of Indian politics. Prof. Gupta left his mark with his continuous perseverance and his will to devote his entire life to public service. Despite hardships , he rose to prime position in Jammu and Kashmir political scenario. He was a strong – willed principled man who impacted many lives over several decades and left behind a thought provoking legacy. A multitalented leader known for delivering results to the best interest of people and society Prof. Chaman Lal Gupta had an illustrious political career spanning over six decades after he became a member of the Jammu and Kashmir Legislative Assembly for the first time in 1972. He was again a member of Jammu and Kashmir legislative Assembly between 2008 and 2014. He was elected to the 11th Lok Sabha from Udhampur constituency of Jammu in 1996 and re – elected to 12th and 13th Lok Sabha in 1998 and 1999. Chaman Lal Gupta was Inion Minister of state , Minister of Civil Aviation between 13 October , 1999 and 1st September 2001 , Union Minister of State (Independent charge) Ministry of FoodProcessing Industries (1st September 2001 to 30 June 2002) and Union Minister of state for Defence ( 1st July 2002 to 2004 ) during Atal Behari Vajpayee led NDA Government at Centre. An author of three books in Hindi and a two – time Jammu and Kashmir Bhartiya Janta Party president Prof. Gupta played a key role in Jammu and Kashmir politics for over 50 years. During student life he was inspired to work for National Movement. When Prof. Gupta was reading in 11th class he was eager to hoist the National Flag in G.G.M science College in the year 1951 – 1952 for which he sat on hunger strike along with 30 other students. It was the time when hoisting of National Flag in Jammu and Kashmir was considered as offence as the state had its own identity, separate assembly , president , and Emblem. In the year 1952 – 53 a movement launched by Pt Prem Nath Dogra became very aggressive with the slogan “ek desh main do vidhan , Do President and Do Nishan Nahin challenge, nahin challenge becoming the rallying point for agitationists. Prof. Gupta alongwith some of the other activists remained on the forefront and he was detained for 8 months. And in the year 1975 when emergency was declared all over India a movement under the Banner of Sangrash Samiti came into existence and Prof. Gupta became the overall Incharge of North Zone ( Jammu _ Kashmir , Haryana , Punjab , Chandigarh and Himachal Pradesh) and during this movement some leaders of Jan Sangh were arrested and they were detained and remained behind the bars. During this course of struggle Mr. Gupta became the renowned figure among the masses and he got the opportunity to serve the nation. Besides being a political leaders, he was also known as educationist , industrialist and a trekker. During the year 1990 militancy was at its peak in Jammu & Kashmir and Mr. Gupta was State president of BJP. In the meanwhile to draw the attention of center and country toward the pathetic condition, burning situation of Kashmir , BJP launched a National Level movement under the banner ” EKTA YATRA” and hoisted National Flag at Lal Chowk, Srinagar. He did not compromise on his political ideology till his last breath. He remained a dedicated soldier of RSS with which he was associated from his student life and relinquished his Government service in late fifties. He worked as Sangh Pracharak in Gujarat for several years. Prof. Chaman Lal Gupta was the brain behind establishing of Village Defence Committees (VDCs) in erstwhile Doda district and other hilly reaches of Jammu region after the militants indulged in massacres in these areas to force the minorities flee from here. A staunch nationalist , Prof. Gupta also fought for the rights of nationalist forces in the erstwhile state of Jammu and Kashmir and stood like a rock against the terrorism and disruptive forces. He was also of the opinion that no package to Kashmir will be fruitful unless and until the displaced Kashmiri Pandits the aborigines of the Valley who were forced to migrate will be settled there with honour and dignity. Prof. Chaman Lal Gupta was also associated with social and Charitable organization and was the patron of Swami Vivekanand Medical Mission. He had also remained its president for a quite long time. Prof. Gupta will be remembered for numerous community service efforts. He was a dedicated legislator and strengthened the Bhartiya Janta Party across Jammu and Kashmir. He was an inspiration for all of us and a strong pillar of the party. He left for his heavenly, journey on 18th May 2021 at the age of 87 years. * Prof. Gupta Sahib will always be remembered as a gentlemen who endeared himself to large number of people due to his simplicity affable manners and lively and futuristic outlook dominating the political horizon of Jammu. *His demise has created a big void in Political circles of Jammu and Kashmir which will not be filled up for a long time. Family background Chaman Lal Gupta was born on 13th April 1934 to Lala Behari Lal Gupta and mother Shanti Devi in Kaleeth Village of Akhnoor. His parents later on shifted to Jammu city to eke out a living. Due to his popularity amongst the masses Late Lala Behari Lal Gupta was elected as president of Chamber of Commerce four times unopposed. Lala Behari Lal Gupta was also elected as President of Central Mahajan Sabha. Prof. Chaman Lal Gupta was the eldest one amongst his five brothers: Dr. O.P Gupta , Late Dr. Subash Gupta , Romesh Gupta (President Jammu Central Mahajan Sabha) Arun Gupta President Chamber of Commerce, Jammu