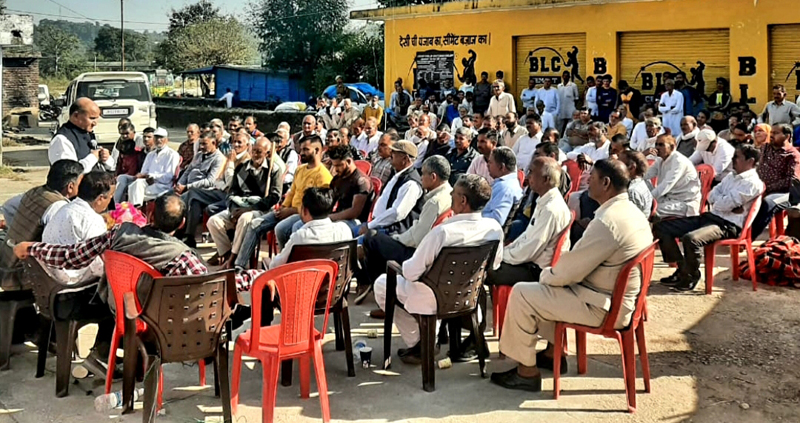 Excelsior Correspondent
JAMMU, Nov 8: Congress today organised one day workers Convention at Kharah Balli in Chhamb Constituency which was presided over by senior Congress leader and former Deputy Chief Minister Tarachand. It was attended by hundreds of people and workers from the area.
Addressing large gathering Tara Chand said that rise in the prices of almost all the things, including essential commodities has become a common feature these days. The Government should do something in this direction. He said the increasing prices of daily commodities have become a headache for the citizens of the nation. Sudden and massive rise in prices cause an all round effect on prices of commodities that makes life of common man miserable. Price hike of Commodities of daily use is very unfortunate for people belonging to lower and middle class.
He pointed out that the election promises made in 2014 by Prime Ministerial aspirant have turned out to be false. The Union Government is yet to take steps to check price hike of essential commodities.
Tara Chand said that hailstorm has damaged the standing Paddy and other crops of farmers badly. Thousand hectares cropped area has been affected with the hailstorm in Jammu region due to massive rains, hail storm and bad weather. He said that the farmers from the plain areas of Jammu District, Samba and Kathua have suffered huge losses due to recent hail storm and continuous rains. The hail storm has badly affected the vegetable crops in most of these areas. He further demanded that relief and Compensation should be provided to all. He hoped that the Government will rise to the occasion and come to rescue of farming community.
He questioned the BJP for its utter failure to ensure the safety of innocent people in Kashmir when the law and order is directly under Home Ministry in UT. He expressed concern over the deterioration in the situation in Kashmir due to the wrong policies of the Government and its mishandling of the situation. He said that the Government should ensure safety and security of minorities in Kashmir and elsewhere because the lawlessness has taken its toll of many due to absence of adequate safety measures.
Prominent among those present on the occasion include Dwarka Nath Sharma BDC Chairman, Jagattar Singh, Madan Lal Sharma, Jagdish Raj Sharma Block president, Bodh Raj, Devinder Singh, Gautam Sharma and others.