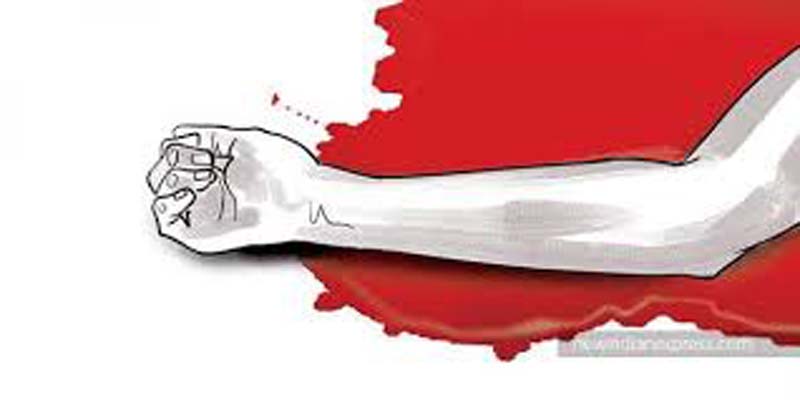 Click here to watch video
He was immediately shifted to SMHS hospital for treatment, where he succumbed to his injuries. He has been identified as Mohammad Ibrahim Khan son of Ghulam Mohammad Khan of Astengo in district Bandipora.
The shop where the salesman was working belongs to Kashmiri Pandit Roshan Lal Mawa. His son Dr Sandeep Mawa is president of Reconciliation Front and works for return of Kashmiri Pandits back to Valley.
Dr Mawa re-opened his father’s shop at Bohri Kadal in 2019 after it remained shut for 29 years.
A police spokesman said that a case registered and investigations taken up. The area has been cordoned off and manhunt launched against the militants responsible for his killing.
This is second target killing in Srinagar in two days. Last evening, militants shot dead a police constable in Batamaloo area of Srinagar.
In a series of operation across Kashmir, security forces today arrested militants of The Resistance Front (TRF) in South Kashmir and busted a militant module in Baramulla by arresting three militant associates.
A police spokesman said that acting on specific information about presence of militants, a joint cordon and search operation was launched by Police, 53RR and 183Bn CRPF in the orchards of village Mirgund in Rohmu area of Pulwama.
He said that during the search, movement of a militant hiding in apple orchards was noticed who tried to escape but was apprehended tactfully by the joint parties exercising maximum restraint.
He was identified as Sarwir Ahmad Mir, resident of Bathen, Khrew of TRF. Incriminating materials including two grenades were recovered from his possession.
In another operation, acting on specific information Anantnag Police and 3 RR cordoned off Wadhan Sirgufwara area of Anantnag. During the search operation, a TRF militant identified as Hafiz Abdullah Malik, resident of Ganjipora Mirbazar was arrested.
Incriminating materials and arms and ammunition including one AK-56 rifle, two AK-56 magazines, 40 AK live rounds, 1 Chinese pistol, 1 pistol magazine, 7 live pistol rounds and 1 pouch were recovered from his possession.
In Baramulla, security forces busted a militant module by arresting the militant associates today.
Police said that during the course of investigation of case FIR No. 232/2021 pertaining to attack by militants on an Area Domination Patrol (ADP) of Police and 46RR in last week of October this year in Cherdari area of Baramulla in which one militant was killed in retaliation, Baramulla Police zeroed in on some suspects.
A joint team of police and security forces arrested three militant associates identified as Asgar Majeed Lone son of Ab Majeed, resident of Gulshanabad Azadgunj, Asif Ganie son of Ghulam Rasool, resident of Bagh-e-Islam Baramulla and Faizan Rasool Gojri son of Ghulam Rasool, resident of Syeed Kareem Baramulla.
On their disclosures especially those of Asgar Majeed, security forces recovered one grenade and 24 rounds of AK-47.
IGP Kashmir Vijay Kumar congratulated the security forces for showing utmost patience and exhibiting professionalism, which resulted in saving two lives. He once again reiterated that police is committed to provide opportunity to misguided youth to shun the path of violence and return to mainstream.