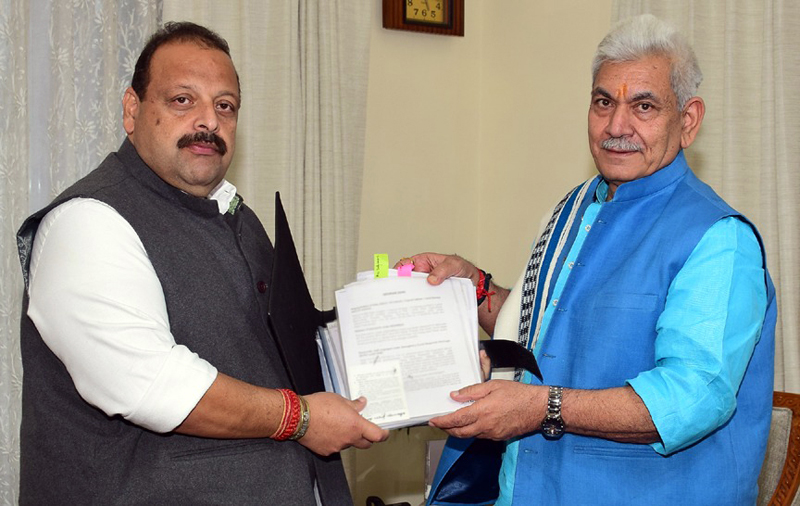 Excelsior Correspondent
JAMMU, Nov 8: Former MLA and senior BJP leader, Devender Singh Rana today called on the Lieutenant Governor Manoj Sinha and raised various issues of public importance.
Rana had a detailed interaction with the Lt Governor, wherein he projected several demands and issues pertaining to regularization of Daily-wagers, ITI trained, casual labourers, Land donors and CP workers; Release of pending payment under MGNREGA; Age Relaxation for aspirants of Sub-Inspectors in J&K Police; Removal of anomalies of non-gazetted police personnel; regularization of services of paramedical staff working in GMCs and Hospitals in Jammu/ Srinagar; mining mineral rates to consumers; implementation of Forest Rights Act in toto and for individuals; development of Patnitop, Sanasar, Surinsar, Mansar, Purmandal and other such tourism potential areas.
The BJP leader also raised various employment and youth oriented issues including preference to Paramedic Staff engaged under Emergency Covid Response Package while filling vacant posts of paramedics; considering candidature of aspirants who have higher qualification and have qualified Class IV examination conducted by JKSSB; creation of vacancies for homeopathic graduates on the analogy of Unani and Ayurvedic disciplines; besides Special recruitment drives of Police/ Paramilitary/Army in border areas and Special Cadre for Engineering, Medical, Education and allied services.
He also drew Lt Governor’s attention towards several issues of Chamber of Commerce & Industries and Transporters, besides the issues of residents of Gandhi Nagar Housing Colony regarding vacation of area in front of their houses.
The Lt Governor while interacting with the former MLA, observed that the Government is formulating development plans and policies reflective of needs & aspirations of the people of J&K. We are determined for ensuring equitable and fast-paced development of the UT and growth & prosperity of its people, he added.
The Lt Governor assured Rana that the genuine issues put forth by him will be given due consideration and urged him to continue his sustained efforts for promoting welfare of the people, said a statement issued by Raj Bhawan.