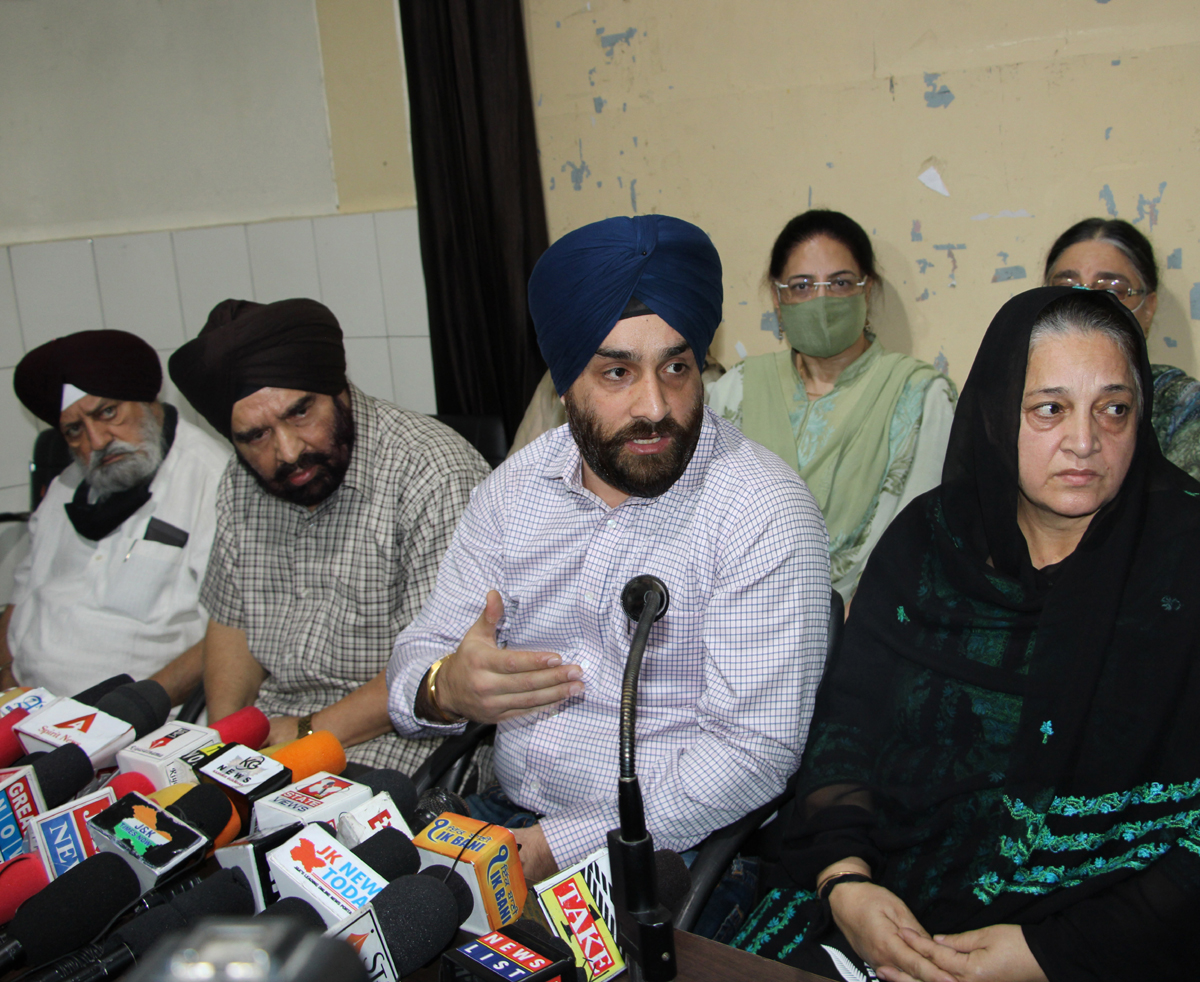 TS Wazir’s family seeks justice
Excelsior Correspondent
JAMMU, Oct 29: Karan Singh, son of former MLC and Chairman of State Gurdwara Parbandhak Board and head of All J&K Transport Welfare Association, T S Wazir who was murdered in Delhi on Sept 3, 2021 today alleged that S. Sudershan Singh Wazir was misleading masses over the murder of his father and also sabotaged their programme to meet Union Home Minister, Amit Shah during his visit in Jammu on October 24.
Addressing a press conference here today, Karan Singh who was accompanied by his mother and uncle (Chacha) S. Bhupinder Singh (Retd SSP) besides other family members said that though Crime Branch of Delhi Police was investigating the murder case of Late, TS Wazir, yet compelled by the circumstances and after certain recent developments, they have been forced to expose some people/suspected conspirators behind this case.
While elaborating further before the media, TS Wazir’s son claimed that S Fateh Singh, DGPC general secretary came to their home two days before the visit of Union Home Minister Amit Shah and told that Home Minister is desirous of visiting Chand Nagar Gurdawara on Oct 24 and consequently all the Sikh organizations including DGPC besides representatives of Transporters Association will jointly submit a memorandum regarding expediting probe into the murder of TS Wazir. He asked the family to join them.
Click here to watch video
But next day, it was to their surprise that the programme was shifted to Digiana Ashram and we were asked to move there along with Transporters’ bodies members and others. Before meeting with Shah, all the members requested Mahant Manjit Singh Ji to take up the case strongly with the Home Minister and Mahant Ji assured all that he will certainly take up the issue and also get it included in the memorandum.
“But on Oct 24 morning when we reached Digiana Ashram, we were surprised to see a conspirator in Late Wazir’s murder case and whose name also figures in the FIR, was there on the dice among some prominent people. Even he was seen representing community there. One of the speakers wasted time of our delegation, waiting there to meet Home Minister and sabotaged our plan and Home Minister left the venue,” Karan Singh alleged.
T S Wazir’s family further alleged that S Sudershan Singh Wazir tried to mislead the masses over the murder of Late Wazir and also sabotaged the meeting of Sikh delegation with Home Minister in Jammu. He said they recently met the Lt Governor Manoj Sinha in this connection and the entire family along with members of All J&K Transporters Association, is meeting Union Home Minister Amit Shah in Delhi shortly. They demanded that Investigating agencies must interrogate conspirators and expose before the public their role behind this case. They further demanded that real accused be arrested and put behind the bars.