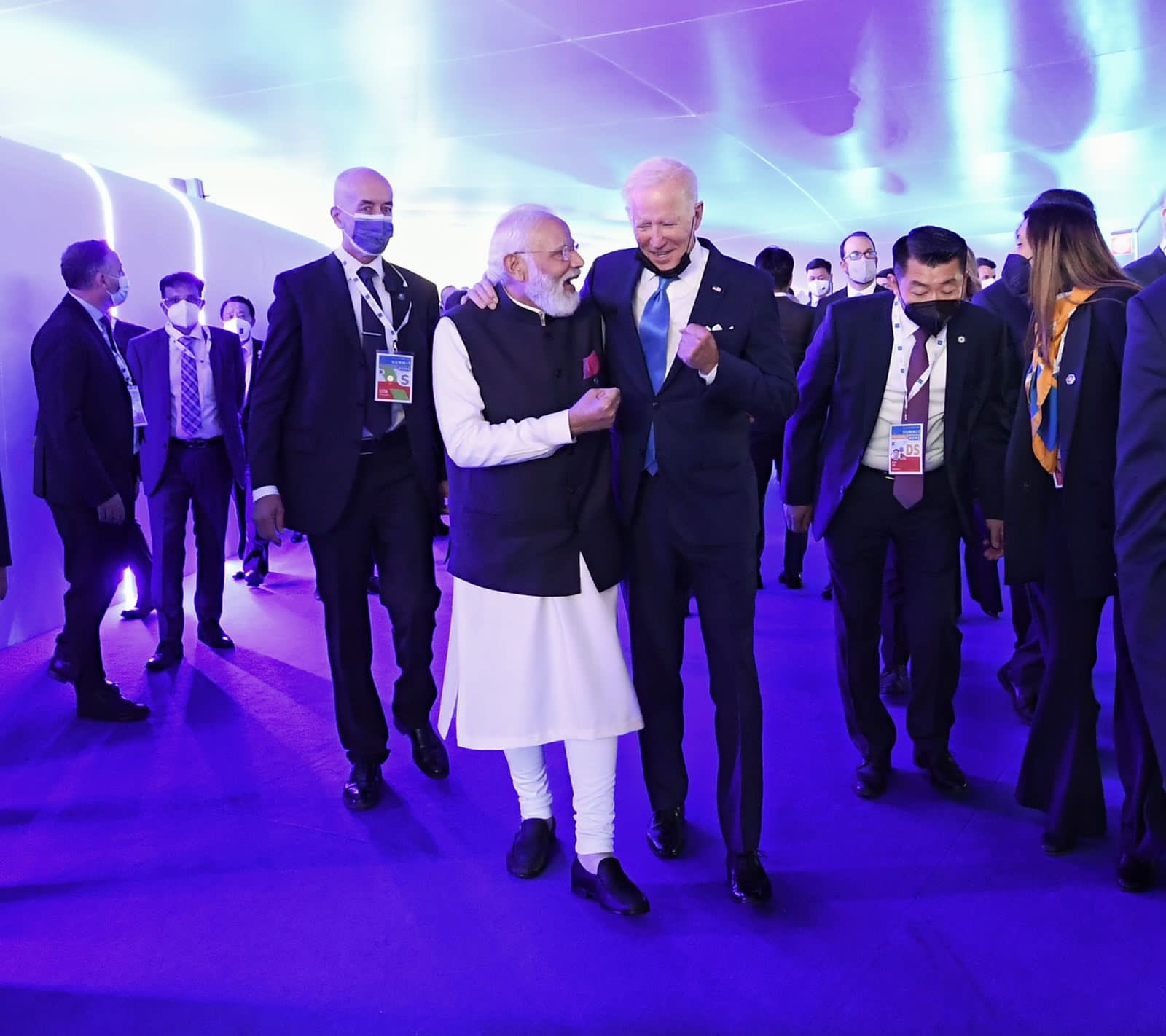 ROME, Oct 30: Prime Minister Narendra Modi on Saturday interacted with world leaders, including U.S. President Joe Biden, on the sidelines of the G20 Summit, exchanging pleasantries and showcasing a spirit of camaraderie.
In a series of photos tweeted by the PMO India, Prime Minister Modi is seen meeting Mr. Biden, French President Emmanuel Macron, U.K. Prime Minister Boris Johnson and Canadian Prime Minister Justin Trudeau.
“On the sidelines of the @g20org Rome Summit, PM @narendramodi interacts with various leaders,” the PMO said in the tweet.
In the pictures, Mr. Modi is seen walking with Mr. Biden in a half embrace, apparently sharing a light chitchat. The two leaders are seen happy to be in each other’s company.
Mr. Biden hosted Mr. Modi at the White House on September 24 for their first in-person meeting.
In other photos, Mr. Modi is seen embracing Mr. Macron and engaged in an animated discussion with Mr. Trudeau and Mr. Johnson.
Earlier, all the world leaders participating in the G20 Summit, including Mr. Modi, gathered for a “family photo”.
“World leaders meet in Rome for the @g20org Summit, an important multilateral forum for global good,” the PMO said in another tweet.
Ahead of Prime Minister Modi’s visit to Rome, Foreign Secretary Harsh Vardhan Shringla said that the G20 remains a valuable forum for India’s engagement with major economies in the world and for setting the trends and norms for global economic development and recovery.
Modi meets Emmanuel Macron Mr. Modi also met with French President Emmanuel Macron on the sidelines of the G20 summit and the two leaders had “productive discussions” on a range of issues of mutual and global interests.
Mr. Modi, who is at the invitation of his Italian counterpart Mario Draghi, was accompanied by National Security Advisor Ajit Doval and External Affairs Minister S Jaishankar during his meeting with Mr. Macron.
“Productive discussions between PM @narendramodi and President @EmmanuelMacron on the sidelines of the @g20org Summit. India and France are cooperating extensively in various sectors. Today’s talks will add momentum to the bilateral ties between the two nations,” the Prime Minister’s Office tweeted.
The meeting comes more than a month after the two leaders held a telephonic conversation, amidst Paris’ strong criticism of the AUKUS (Australia-UK-US) security partnership.
During the telephonic conversation last month, the two leaders had agreed to “act jointly” in the Indo-Pacific to keep the region stable, rules-based and free from any hegemony.
At the time, the two had reviewed the increasing bilateral collaboration in the Indo-Pacific region and the important role that the India-France partnership plays in promoting stability and security in the region.
They had vowed to maintain regular discussions to coordinate ahead of upcoming events, in particular the G20 and the COP26 on climate change, and continue with their joint actions against the COVID-19 pandemic. (Agencies)