Home Kashmir 500 Atal Tinkering Labs likely to be set up in J&K -...
Kashmir 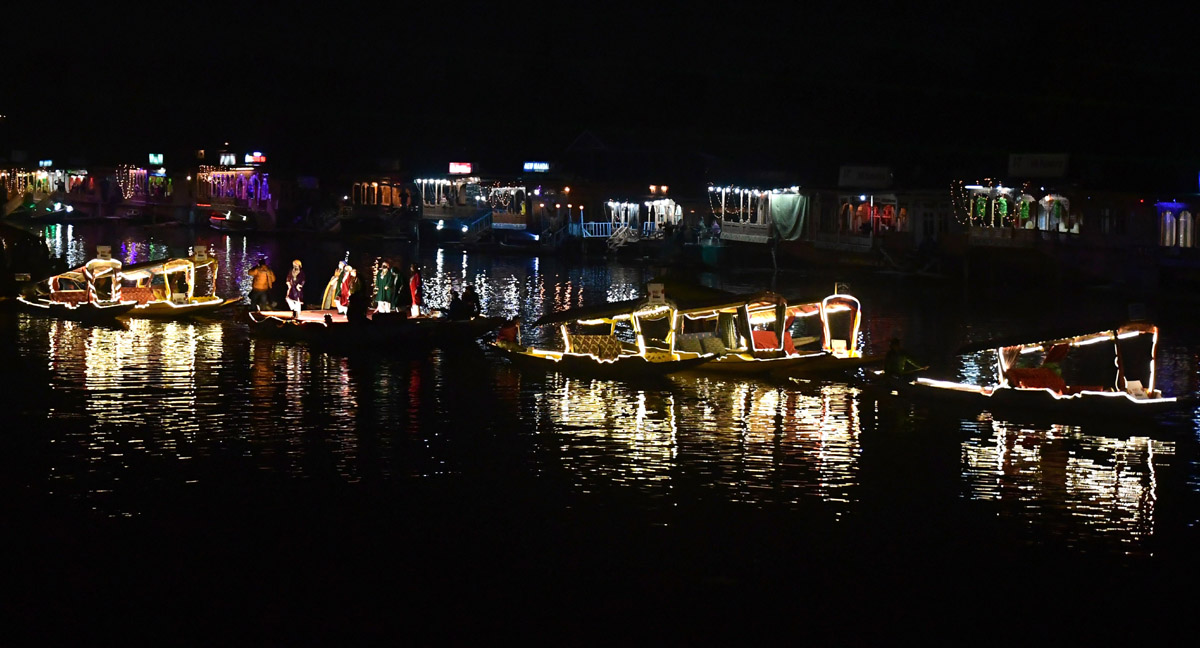 CS inaugurates open air theatre in Dal Lake
Excelsior Correspondent
SRINAGAR, Oct 29: UT Government today held an interaction with NITI Aayog on improving expenditure outcomes and governance efficiencies in J&K.
Chief Secretary J&K, Dr. Arun Kumar Mehta along with the senior Administrative Secretaries of various departments participated in the interaction.
While laying out the priorities of the Government, the Chief Secretary stated that although the UT has moved to more transparent financial systems and has the right fundamentals in place for qualitative transformation, however, in areas like expenditure outcomes, contract management; capacity building of the district officers etc. there is a need to urgently reform for more efficient and sustained growth.
Dr Mehta observed that despite 1 to 10 teacher- pupil ratio, which is amongst the best in the world, there are serious issues of learning outcomes even as the enrolment ratio in schools is less than optimaland the gender parity continues to bea concern.
He stated that the time has come to make a switch towards measuring outcomes and quantifying outputs and linking it to the allocation of resource allocation.
In his presentation, Dr Shekhar Bono, Director General Development, Monitoring and Evaluation Office, NITI Aayog outlined the shift in focus that has happened in the central government from tracking inputs to monitoring outputs and measuring outcomes.
He informed that the central ministries and departments are required to identify and target specific outcomes and the resource allocation is linked to clear outlining of these objectives in the budget proposals.
Earlier, participating in the interaction, Navin K Choudhary, Administrative Secretary Agriculture, J&K outlined the data deficiencies as one of the concerns for planning.
He laid emphasis on conducting a manpower audit in J&K government in the context of the changed realities of the present times where considerable automation has happened; leading to redundancies at multiple levels across the government.
While stating that there is a need to ascertain the customer satisfaction levels in J&K, Administrative Secretary, Health and Medical Education department, Vivek Bhardawaj observed that NITI Aayog can help the department in preparing a framework to enable the department to identify the medically unserved areas so that establishment of sub centres/health centres/medical facilities is done based on an objective criteria.
Administrative Secretary, Urban Development, Dheeraj Gupta, requested the Aayog to assist the department in the preparation of transaction advisory services in the case of citi buses, e-buses, real estate and housing.
Commissioner Secretary, Mining Manoj Dwivedi observed that the output outcome monitoring framework of the Aayog can be replicated by the UT government as it fits in with requirements, besides stating that Aayog’s dashboard can also be adopted by the J&K government with minor customisations.
Tourism Secretary, Sarmad Hafeez informed that a list of 12 assets of JKTDC has been forwarded to Aayog for assisting the department in the matter of transaction advisory services and drafting a model concessionaire agreement for leasing out the assets on PPP mode.
DG, IMPA, Saurab Bhagat stated that his organisation is working on case studies on B2V, universal health coverage, transparency of financial systems etc. and would like Aayog to act as an enabler to improve the quality of the reports, besides helping them with newer/best practices/parameters that can be incorporated in the District Governance Index being prepared by IMPA for better outcomes.
The Chief Secretary advised the NITI Aayog to formulate a short term plan of execution in respect of the activities in which it has shown interest as well as in the areas where requests for domain based assistance have been made by the departments in J&K and move towards executing them.
Meanwhile, Chief Secretary inaugurated first of its kind an open air theatre and laser show in middle of the Dal Lake in Srinagar.
Principal Secretary to Lieutenant Governor, Nitishwar Kumar; Principal Secretary, H&UDD, Dheeraj Gupta; Divisional Commissioner Kashmir, Pandurang K Pole; Secretary Tourism and Culture, Sarmad Hafeez and Director Tourism, G N Itoo were also present on the occasion.
The dignitaries along with other guests watched “Kashmir ki Kali” movie telecast on open air theatre.
The show was organised by Jammu and Kashmir Tourism department in collaboration with Smart City Srinagar and Mission Youth J&K.
Earlier, Chief Secretary inaugurated laser show at Ghat Number- 7, where a short film on history of houseboats in Kashmir was also telecasted on an open houseboat.
On the occasion, a shikara rally adorned and shining with lights passed through Nehru Park to Kabootar Khana with local artists singing and dancing Kashmiri songs which enthralled guests and all passersby through the Boulevard road.
A fleet of shikaras and houseboats were kept available for tourists to join the celebrations and witness laser show and film.