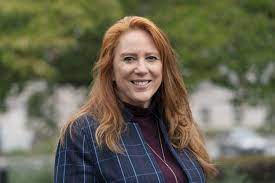 Washington, Oct 26: A Republican secretary of state who challenged former President Donald Trump’s false claims of election fraud in 2020 is the front-runner for a job heading the Biden administration’s effort to protect future elections, according to people familiar with the discussions.
Kim Wyman, 59, has led elections in Washington state for years, and she was reelected to a third term in November — the lone statewide-elected Republican on the West Coast.
She is in talks to serve as the election security leader for the Department of Homeland Security’s Cybersecurity and Infrastructure Security Agency, the agency responsible for safeguarding US elections, the people told The Associated Press.
The people had knowledge of the discussions but weren’t authorized to speak publicly and spoke to AP on condition of anonymity.
Wyman would serve as the government’s liaison to the states, a job that was high profile before 2020, and will only be more so following Trump’s false claims about the 2020 election he lost to Joe Biden, and the embracing of those false claims by other members of the GOP.
Trump and his allies made — and still make — false assertions that there was rampant election fraud in 2020, despite evidence to the contrary.
Former Attorney General William Barr told AP there was no sign of widespread fraud.
As Trump railed over the election, leaders of the Cybersecurity and Infrastructure Security Agency stated publicly that it was the safest election in history. One was fired by Trump shortly after.
Scores of lawsuits filed by Trump and his allies over claims of possible election fraud were dismissed by the courts, including by Trump-appointed federal judges.
Still, millions of Americans believe the 2020 election was stolen from Trump. That misinformation prompted thousands to storm the US Capitol on January 6 in a violent but failed effort to stop the certification of Biden’s win.
The discussions involving Wyman were first reported by CNN.
The White House declined to comment and the Department of Homeland Security didn’t immediately respond to a request for comment.
Wyman did not respond to a text message Monday, and her spokeswoman said they could not comment on the details of the story.
Last October, Wyman published the book “Elections 2020: Controlling Chaos: How Foreign Interference, a Global Pandemic, and Political Polarization Threaten US Democracy.”
She was a constant presence on national networks in the weeks leading up to the 2020 election, extolling the safety and security of the vote-by-mail system in her state, a process in place there for years. She disputed Trump’s claims that mail-in voting was fraudulent.
In interviews with AP before the 2020 election, Wyman said she was “an elections administrator first and foremost.”
“If the president wants to rant and rave about how insecure vote by mail is or how our elections are going to be rigged, then I’m going to talk about the security measures that Washington state put in place,” she told AP in September 2020.
“And I’m going to spend my time talking about the facts, and no, I’m not going to get mired down in some sort of political debate and posturing.”
Before the state’s 12 members of the Electoral College cast their votes for Biden in Olympia, Washington, in December, Wyman got emotional while talking to them about the vote they were about to take.
“While some people continue to question the outcome of this election, average citizens from all walks of life will step up today to exercise their responsibility to perform their constitutional duty to the best of their ability,” she said.
“This is an important ceremony. This is the American way of governance. This is democracy in action.”
Wyman has never shied away from the fact that she’s a Republican, but has said she believes she’s approached the job in a nonpartisan way.
“It’s how you do the work every day, and my job is to inspire confidence in every voter no matter if they are a staunch Democrat or a hardcore Republican,” she said last year. (AGENCIES)