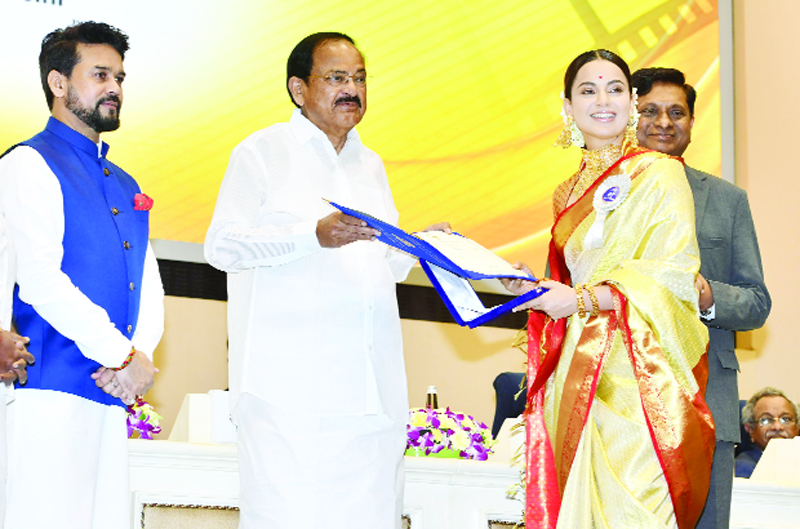 NEW DELHI, Oct 25:
Vice President Venkaiah Naidu on Monday conferred superstar Rajinikanth with the prestigious Dadasaheb Phalke Award and honoured the other winners of the 67th National Film Awards, including actors Manoj Bajpayee, Dhanush and Kangana Ranuat at a ceremony here.
The National Film awards were announced in March this year honouring the best in cinema in 2019.
The vice president said while COVID-19 pandemic pushed the ceremony by almost two years, he was happy to finally present the awards to the country’s most talented artistes from the film industry.
“I’m very happy to be here and I congratulate all the winners and everyone associated with these films,” he said during the ceremony held at the Vigyan Bhawan here.
Naidu said he was elated with the regional films, which he addressed as the national films, dominating the winners list.
“The Indian film industry has made a mark for itself in various languages. I believe cinema has its own language which goes beyond the cultural and regional differences. We celebrate the Indian film industry’s success because it gives us entertainment, enlightenment and encouragement,” he added.
Urging filmmakers and actors to use their talent for the betterment of people and society, Naidu said cinema should generate “positivity and happiness”.
“We should focus on creating cinema which is entertaining, gives us solace, some message, reduces our tension and makes us think positively. Positivity is the need of the hour. Don’t be obstructive, be constructive,” he said.
Union minister of Information & Broadcasting, Anurag Singh Thakur, praised the Indian film industry’s continuous efforts to keep the people entertained amid the pandemic.
He said films play an important role in influencing the masses and hence it is necessary for the industry people to create content which inspires people.
“Our film industry is seen as a soft power and has played a major role in creating brand India. It depends on the filmmakers how they want to showcase the country and its talent in the movies,” the minister said, adding that he aims to take the movie watching experience to each and every corner of the country.
The ceremony was attended by all the winners including Rajinikath, son-in-law Dhanush who, along with Bajpayee, was given the best actor honour for “Asuran”. Bajpayee was awarded for his performance in “Bhosle”.
Rajinikanth thanked his mentor, late filmmaker K Balachander, in his speech.
“I’m extremely happy to receive this award… I dedicate this to my guru, my mentor K Balachander sir. I thank my brother Sathyanarayana Rao, he is a father figure in my life, for giving me great values…
“My friend, driver and transport colleague Raj Bahadur. He spotted the acting talent in me and encouraged me to join cinema. All my producers and directors who have produced my films, technicians, artists, distributors, media, press and all my fans, and Tamil people…” the actor said after receiving Indian cinema’s highest honour.
Bajpayee, who has previously won the National Award for “Satya” and “Pinjar”, said it feels great to be recognised.
“I feel very happy to be honoured for a performance in a film which is very dear to me, that I’ve made with so much conviction and resolve. It feels great,” the actor told PTI.
Ranaut, the winner of the best actress award for her performance in “Manikarnika” and “Panga”, paid tributes to her parents after getting her fourth National Award.
“We all grow up with a deep desire to be worthy of our parents’ love, care and sacrifices… After all the troubles I give my mummy papa, such days seem to make up for all those mischiefs. Thank you for being my mummy papa. I wouldn’t want it any other way,” she wrote on Instagram alongside a series of photos with her parents.
Director Priyadarshan’s Malayalam film “Marakkar: Arabikadalinte Simham” was awarded the best feature film, while Sanjay Puran Singh Chauhan received the best director trophy for his Hindi film “Bahattar Hoorain”.
The filmmaker, who will soon start working on the Akshay Kumar-starrer “Gorkha”, said he is happy to have received the recognition and is excited for the future.
“I’m very happy and excited. It’s a huge honour,” Singh Chauhan told PTI.
Actors Pallavi Joshi and Vijay Sethupathi were given the best supporting actress and best supporting actor awards for their performances in films “The Tashkent Files” and “Super Deluxe”.
Nitish Tiwari directorial “Chhichhore” was given the best Hindi film honour and the movie’s producer, Sajid Nadiadwala, dedicated the award to the lead star of the movie, Late actor Sushant Singh Rajput.
“When we greenlit the film, people thought it’s a non-commercial film, but when it was released it did great business. I dedicate this award to Sushant, he is up there looking at us, smiling. We have some great memories,” Nadiadwala told PTI.
Singer B Praak said he was full of “tears and gratitude” on receiving the National Award for best male playback singer.
Best female playback singer award was given to Savani Ravindra for “Raan Petala” from Marathi feature “Bardo”.
Nargis Dutt Award for best feature film on national integration was received by the makers of “Tajmahal” (Marathi), while the best film on social issues trophy went to “Anandi Gopal” (Marathi). Indira Gandhi Award for best debut film of a director was given to Mathukutty Xavier for “Helen” (Malayalam).
Naga Vishal won the best child artist trophy for Tamil film “Kruppu Durai”.
In the non-feature film category, 22 titles were given the National Film Award.
Sikkim was given the award for most film friendly state and “A Gandhian Affair: India’s Curious Portrayal of Love in Cinema” by Sanjay Suri got the best book on cinema prize. (PTI)