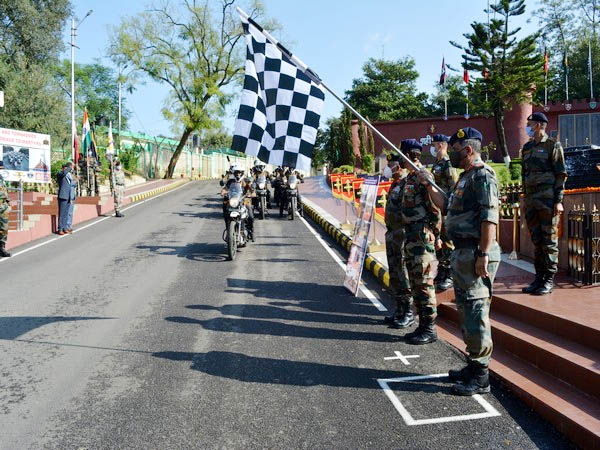 JAMMU, Oct 25: The army on Monday flagged off a motorcycle expedition of world record holder Army service corps (ASC), nicknamed as “Tarnadoes”, from Northern Command headquarters in Jammu and Kashmir’s Udhampur district on Monday, officials said.
The expedition comprising of 11 riders on Royal Enfield Himalayan was flagged off by chief of staff (CoS), northern command, Lieutenant General S Harimohan Iyer from Dhruva war memorial inside Udhampur military garrison, PRO of Northern command said.
The ASC motorcycle display team “Tornadoes”, led by Maj Shivam Singh, comprises of one officer and 10 other ranks.
They will ride to Srinagar, Kargil, Leh, Khardung La, Siachen Base Camp, Pang, Shimla, Chandigarh and finally culminate at national war memorial in New Delhi on November 11, the PRO said.
They will cover a total distance of 2,500 km over a rugged and treacherous terrain.
The motorcycle expedition signifies the courage and glory of the Indian army and will pay homage at various war memorials enroute in the northern frontiers, including Rezang La, the PRO said.
The ASC will celebrate its 261st corps day on December 8 and the Tornadoes motorcycle expedition aims to commemorate the rich history of the Corps by undertaking the challenging expedition, he said.
The ASC Tornadoes have the honour of holding 32 certified World Records and have displayed their skills at various national and international gatherings, he added.
The records include categories such as longest ride through tunnel of fire and highest and fastest pyramids.
The team is based at the ASC Centre (South), Bangalore. (Agencies)