Thousands of 2-wheelers seized, drones pressed into service ahead of HM’s visit 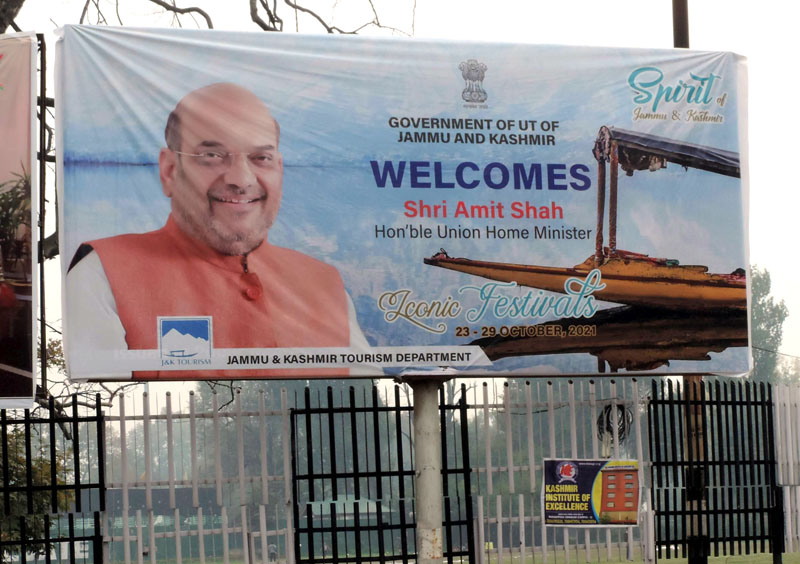 New bunkers set up in Srinagar

Srinagar, Oct 22: The new security bunkers have been set up in Srinagar and more paramilitary troops deployed following the civilian killings by militants in Kashmir since early this month and ahead of visit of Union Home Minister Amit Shah.
Some of these bunkers manned by the Central Armed Paramilitary Forces (CAPFs) are being set up in many areas of Srinagar where these were removed between 2011 and 2014 following overall improvement in the security situation across Kashmir.
The construction of new bunkers and putting more personnel on the ground is being done to prevent the free movement of militants.

Click here to watch video
In 2010, more than 50 security pickets and bunkers were removed in Srinagar on the recommendations made by an all-party delegation visiting Kashmir in that year.
An official said that 50 more companies of para-military troops are being deployed in Kashmir to prevent the rising incidents of militancy in the Valley. For the last two weeks 11 civilians were killed by militants in Kashmir including some migrant workers and those from minority community.

Besides this, police have seized thousands of two wheelers in Srinagar and other parts of the Valley. Police is seizing bikes and scooties from the youth as part of a major crackdown.
“I have been told to come after 25th October to collect motor cycle”, said Nadeem whose bike was seized by police yesterday.
“I am entirely dependent on my bike to do my work,” he said adding, “I have to visit many places in a day. And I always carry all the documents while travelling, still my bike was seized.”
People for the last few days have stopped using the two wheelers to prevent them from seizing.
IGP, Kashmir zone, Vijay Kumar said these steps were purely related to recent violence. “Seizing some bikes and shutting down of internet of some towers is purely related to #terror #violence. It has nothing to do with visit of the HM,” he tweeted yesterday.
The internet services on a dozen towers — mostly in the areas where non-local labourers were killed in the last week — were snapped three days ago while police have started stringent checking of documents of two-wheelers plying on the roads.
Residents in Pampore area said that the internet shut down in the area are frequent and it has creating problems for the people especially students.
Deputy Inspector General of CRPF (operations) Mathev A John said that CRPF along with the police have jointly put in place an “aerial surveillance cover” for the areas where minority community members are living and also the City Centre Lal Chowk to prevent further attacks by militants on the eve of Union Home Minister Amit Shah’s visit to J&K on October 23.
He said that they have tested drones at Pratap Park area of Srinagar today ahead of Shah’s visit.
He said that they have tested drones that will be used for aerial monitoring of the areas where members of minority community are living.
“The step has been taken in the wake of recent attacks on minority community members and non-local labourers,” the DIG CRPF said. He said that there will also be aerial surveillance in Lal Chowk and its adjoining areas.
The CRPF officer said that in Lal Chowk additional round the clock nakas have been put in place jointly by the Police and CRPF to keep a close watch on the suspects.
Security forces have also established fresh check points at various places in Srinagar and other parts of Valley and people are being frisked and vehicles checked.
Meanwhile, in a major crackdown, the Jammu and Kashmir Government today shifted 26 Kashmiri prisoners who were detained under Public Safety Act (PSA), to Central jail Agra.
The PSA allows detention from three months to two years without a trial.
The order in this regard has been issued by the Principal Secretary to the Government (Home department) Shaleen Kabra on Thursday.
“In exercise of the powers conferred under section 10 (b) of Jammu and Kashmir Public Safety act, 1978, the Government hereby directs to remove/shift detenues who have been detained under the provisions of Jammu and Kashmir Public Safety Act 1978 from their present place of lodgement to Central Jail, Agra, Uttar Pradesh with immediate effect,” the Government order read.
The Government sources said that more prisoners may be shifted in coming days outside UT jails and a list has already been formulated by the government.
Majority of those being shifted have been arrested in the last two months.
After a series of civilian killings in targeted attacks earlier this month, in a major crackdown police had detained over 500 persons to probe these killings that had triggered panic among the minorities. Those arrested were having cases of stone-throwing against them or they were formerly affiliated with some separatist groups or were former overground workers.