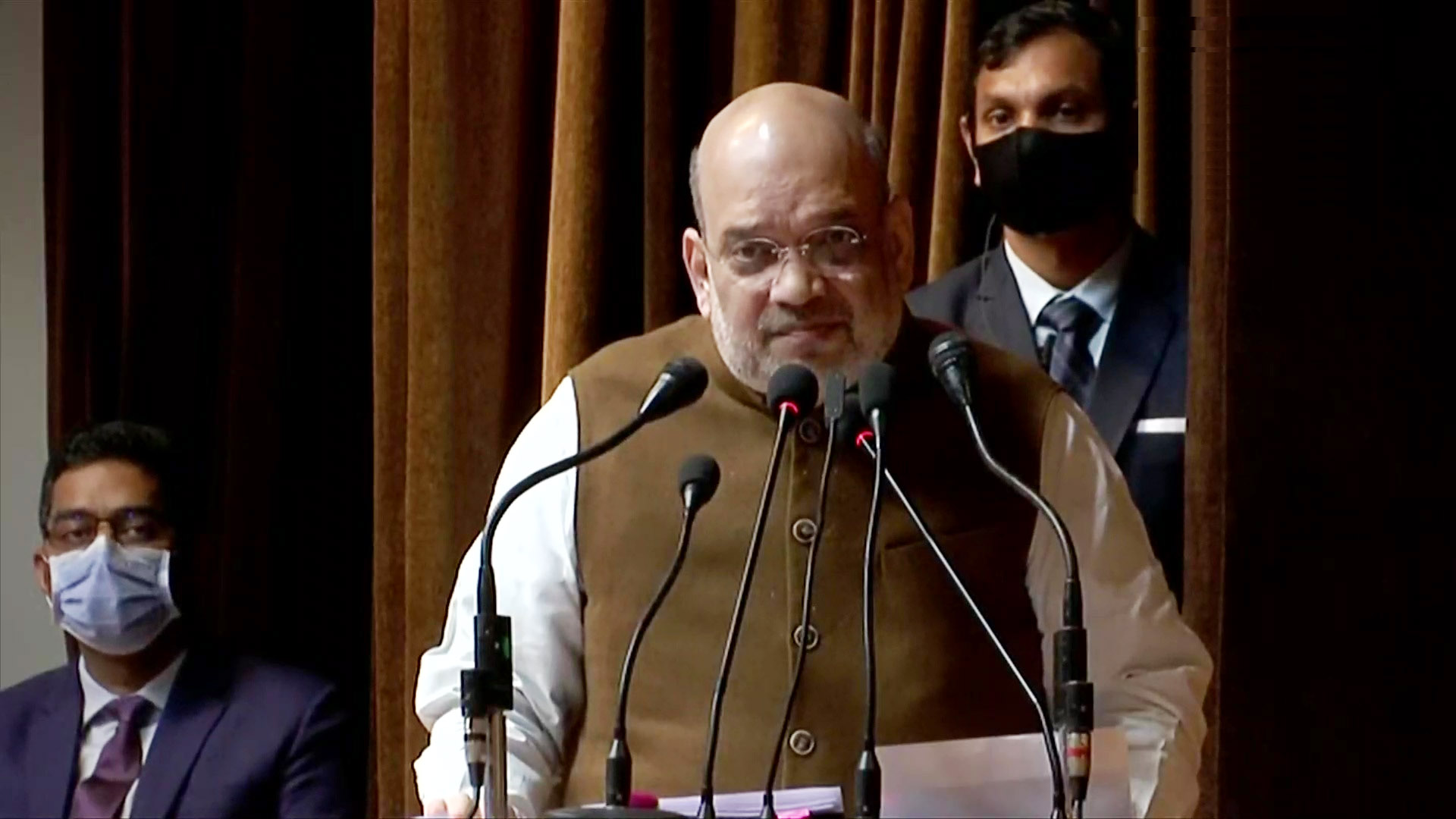 Srinagar, Oct 23: Union Home Minister Amit Shah on Saturday said a conspiracy was hatched to provoke people to disrupt law and order situation after the abrogation of Article 370 in Jammu and Kashmir and noted that the steps such as the imposition of curfew and restriction on the internet “saved lives of Kashmiri youth”.
Shah, who is on a three-day visit to Jammu and Kashmir, was interacting with members of Jammu and Kashmir’s youth clubs on Saturday.
“After 2019, a few people here caused the disturbance. They questioned why curfew was imposed or the internet was suspended. I want to ask a question first. The three families ruled here for 70 years. We are in government for only two-two-and-a-half-years. Only three families ruled here. Do they have an answer why 40,000 people were killed? A conspiracy was hatched to provoke people. Some foreign elements were involved in the conspiracy. Had there been no curfew, don’t know how many lives would have been lost. The Kashmiri youth have been saved by the imposition of curfew and suspension of internet,” he said.
“Now the situation is normal. Everything has been opened. Employment opportunities have been created, tourism is developing, new industries are coming. Their intention was that the curfew is lifted so that terrorism could increase, clashes between police and people would increase, people will be killed and, they can earn political benefits,” he added.
Shah asserted that no one can obstruct development in Jammu and Kashmir while adding that strict action will be taken against those who want to disrupt the peace and harmony in the union territory.
“Kashmir has seen a new beginning — from fear, terrorism, corruption, and family-based politics to peace, development and prosperity. The youth of Jammu and Kashmir have strengthened this change. Terrorism has reduced, stone-pelting has become invisible. I want to assure you that strict action will be taken against those who want to disrupt the peace and harmony of Jammu and Kashmir. No one can obstruct development here. It is our commitment,” Shah said.
The minister said that “transparency and corruption-free governance” Jammu-Kashmir has witnessed since 2019 is the pillar of the region’s development.
“Would it be possible without abrogating Article 370? Our projects for Jammu and Kashmir are multidimensional. It promotes education and skill development, as well as economic assistance. We’ve also promoted sports and tourism,” he said.
The government had abrogated Article 370 in Jammu and Kashmir in August 2019. It had also bifurcated Jammu and Kashmir into two union territories.
Shah said the government in Jammu and Kashmir has decided to form a youth club in every panchayat and Rs 25,000 will be provided to every such club. Sports programmes have also been started.
“What did the previous governments give to Jammu and Kashmir in 70 years? 87 MLAs, 6 MPs and 3 families.Prime Minister Narendra Modiji has made it possible that about 30,000 elected representatives in the Panchayat elections, who are serving the people today. Post-independence, the Government of India helped Jammu and Kashmir, but the poverty, unemployment did not go away, infrastructure did not develop. Now poverty is going from here, people are getting employment opportunities.”
Earlier in the day, Shah held a security review meeting in Srinagar. Jammu and Kashmir Lieutenant Governor Manoj Sinha was present in the review meeting.
This is Shah’s maiden visit to the union territory since the abrogation of Article 370. (Agencies)