Won’t rest till militancy is eradicated from J&K: LG 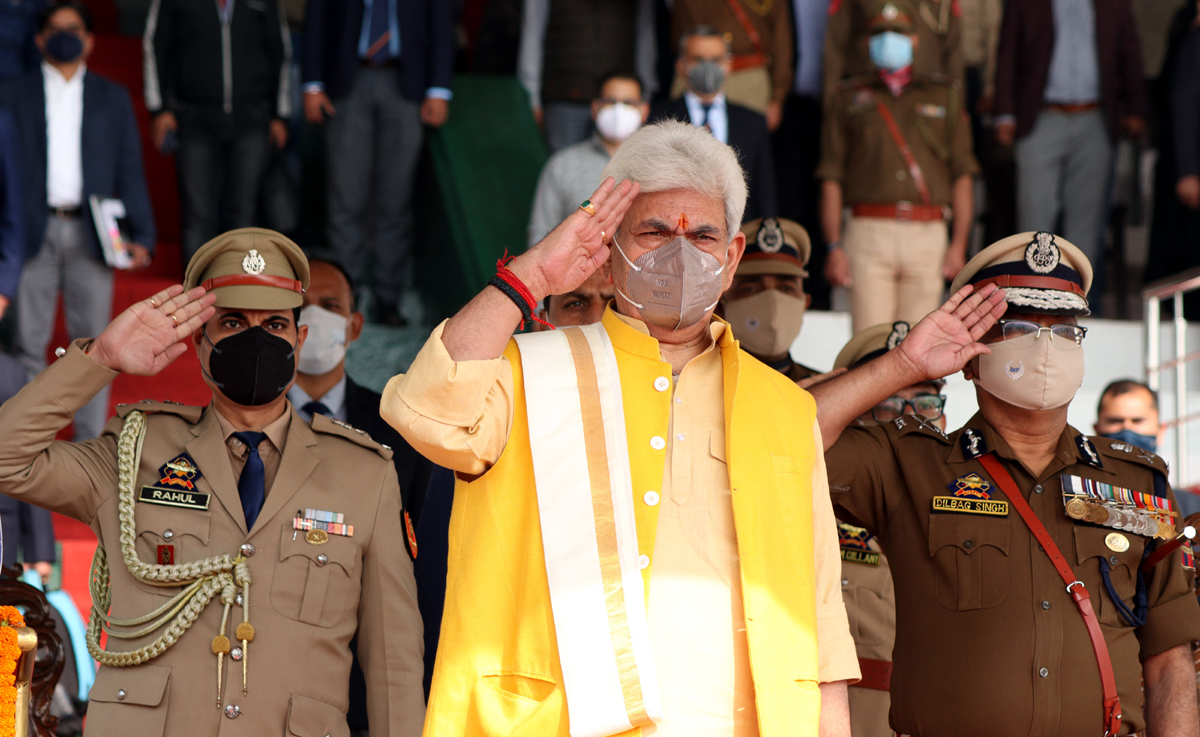 Security forces will foil disruption of peace plans: DGP
Fayaz Bukhari
Srinagar, Oct 21: Lieutenant Governor Manoj Sinha today said that those involved in the killing of innocent civilians and members of minority community will have to pay the heavy price for their inhuman acts and that the security forces along with the administration won’t rest till militancy is eradicated from Jammu and Kashmir.
Sinha without naming Pakistan said if someone tries to disrupt the peace in J&K, they will be dealt sternly and there will be a befitting reply from our side.
He said that those trying to disrupt the peaceful atmosphere in J&K to put a break on the developmental process need to know that India and J&K are capable of giving them a befitting reply as well. “If anyone tries to disrupt the peace, they will face the music,” he said without naming the neighbouring country.
Click here to watch video
Addressing the Police Commemoration Day function at Armed Police complex Zewan, Srinagar, the LG said police and the other security forces are doing a commendable job in keeping the peace intact.
The LG said that those involved in the gruesome killings of civilians and minority community members are enemies of peace.
“Administration along with police and other security forces won’t allow anyone to damage the age-old communal fabric of J&K,” Sinha said.
He said that those who killed civilians and minority community members will have to pay the heavy price for their acts.
Appealing to civil society and other prominent citizens of J&K to raise voice against civilian killings in Kashmir, the LG said that condemning the heinous and inhuman killings of civilians in one voice will help administration, police and other forces to speed up their operations against militants.
“Today, I want to announce that the administration, police and other forces won’t rest till we root-out militancy from the J&K soil,” he said.
The LG said that police are working on multiple fronts. “J&K Police has been on the forefront of fighting militancy and its men have protected the integrity of the country with their blood. I pay homage to all policemen who were killed in militant attacks, fighting militancy or in line of duty or action,” he said. The LG announced that Srinagar will have a hostel-cum-school facility for the children of police martyrs soon. He added that while crime cases are rising, police are upgrading its technical capabilities to deal and fight various social crimes in J&K.
“Be it fighting COVID pandemic, implementing COVID appropriate behaviour, maintaining law and order or fighting militancy, the police are on the forefront. J&K Police is not popular in UT only but in the entire country for its capabilities and responsibilities,” the LG said.
Director General of Police (DGP) Dilbag Singh in his address said that killing of civilians and minority community members in J&K was a move to disrupt peace and to trigger a communal fissure. He said that police and security forces will foil all such plans and won’t allow militants to succeed.
He said that some militants while acting on the advice of their mentors across the LoC resorted to disruption of peace by killing civilians and members of minority community. “These selected killings were aimed at triggering communal fissures in Kashmir. Police and other forces acted swiftly to foil the designs of militants and their mentors,” he said.
“We will not allow disruption of peace and damage to the communal fabric of J&K at any cost”, he said.
The DGP said killing of civilians was not just to disrupt the peaceful atmosphere but also hit the livelihood of common masses of Kashmir and the tourism as well. “We have given a befitting reply to the enemies of peace and will continue to do that,” the DGP said.
He said that this year so far 370 policemen and other security forces personnel were killed in line of duty across India. The DGP paid rich tributes to all the policemen killed in line of action stating that police is committed to protect the integrity of country and to keep the peace intact in J&K.