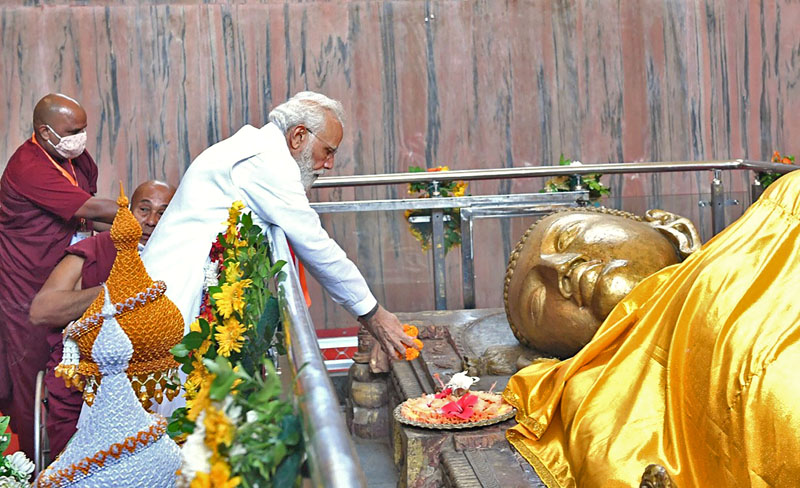 KUSHINAGAR (UP), Oct 20:
Giving a push to the Government’s Buddhist tourism circuit initiative, Prime Minister Narendra Modi on Wednesday inaugurated the Kushinagar international airport in Uttar Pradesh and said a slew of measures are being taken to boost the country’s aviation sector.
At around 9 am, a Sri Lankan Airlines flight carrying scores of Buddhist monks and dignitaries from the island nation touched down at the airport, built at an estimated cost of Rs 260 crore. The monks also brought relics of Lord Buddha and were welcomed by various Union ministers and Uttar Pradesh Chief Minister Yogi Adityanath.
“Development of Kushinagar is one of the key priorities of the UP and central governments,” Modi said, as he formally inaugurated the airport at Kushinagar, the final resting place of Lord Buddha and also a key Buddhist pilgrimage site.
The Prime Minister said the airport will boost connectivity and tourism, while also helping develop an entire economic ecosystem in the region and create new job opportunities.
He said the Government’s special attention to the development of places associated with Lord Buddha and developing Kushinagar are among the top priority areas for the UP and Central Governments.
Referring to the recent decision to privatise Air India, Modi said the country has taken a big step related to Air India so that its aviation sector should run professionally, and convenience and safety should be given priority.
“This step will give new energy to the aviation sector of India,” the prime minister said and also referred to the reforms related to the opening of defence airspace for civil use.
On the newly launched ‘PM Gatishakti- National Master Plan’, Modi said this will not only improve the governance, but it will also be ensured that whether it is road, rail, or plane, they support each other and increase each other’s capacity.
About the UDAN scheme, he said more than 900 new routes have been approved in the last few years, out of which air service has started on more than 350.
Besides, more than 50 new airports or those which were not in service earlier have been made operational, he added.
In Uttar Pradesh, 8 airports are already functional.
The prime minister said that work is on Jewar international airport after Lucknow, Varanasi and Kushinagar.
“Apart from that, airport projects are going on in Ayodhya, Aligarh, Azamgarh, Chitrakoot, Moradabad and Shravasti,” he added.
The new airport is part of the Government’s endeavour to connect Buddhist pilgrimage sites around the world.
Modi said that tourism in all its forms needs modern infrastructure complete with rail, road, airways, waterways, hotels, hospitals, internet connectivity, hygiene, sewage treatment and renewable energy, ensuring a clean environment.
“All these are interconnected, and it is important to work on all these simultaneously. Today’s 21st century India is moving ahead with this approach only,” he said.
According to him, the recently launched drone policy is going to bring life-changing transformation in the fields ranging from agriculture to health to disaster management to defence.
Union Civil Aviation Minister Jyotiraditya Scindia on Wednesday said that Kushinagar airport will connect Buddhist pilgrim sites.
Flights from Delhi, Mumbai and Kolkata will soon operate to Kushinagar airport.
At the inaugural event, Yogi Adityanath said work for 11 new airports, including two international aerodromes, are progressing in the state.
The Kushinagar airport’s terminal building is spread across 3,600 square metres. It can handle 300 passengers during peak hours. Kushinagar is the final resting place of Gautama Buddha where he attained Mahaparinirvana after his death.
The passengers from Sri Lanka were also welcomed with traditional music at the tarmac. (PTI)