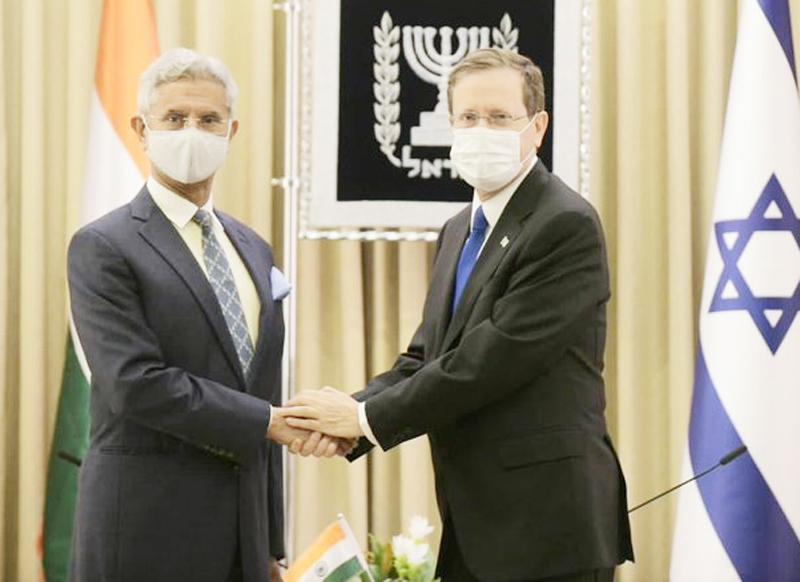 JERUSALEM, Oct 20:
External Affairs Minister S Jaishankar on Wednesday called on Israeli President Isaac Herzog and discussed ways to promote and strengthen the growing bilateral relationship in various sectors besides exchanging views on global strategic affairs.
The meeting took place at Beit HaNassi, the president’s official residence here.
President Herzog thanked Jaishankar for his personal commitment, and that of Prime Minister Narendra Modi and his ministers, to promoting and strengthening ties with Israel, according to a press release issued by the President’s office.
During the diplomatic working meeting, Herzog also praised the flourishing of the Israel-India relationship in a range of fields.
Ahead of the 30th anniversary of the establishment of diplomatic relations between Israel and India next year, President Herzog emphasised his intention to personally assist in promoting and strengthening this important relationship, the statement said.
President Herzog and Jaishankar further discussed global strategic affairs, it said.
Jaishankar said that it was “a great honour” to call on President Herzog.
“I bring the greetings and good wishes of the government and people of India as we approach the 30th anniversary of the upgradation of the ties,” Jaishankar wrote in the visitors’ book at Beit HaNassi.
Jaishankar, who is currently on a five-day visit to Israel, also called on Prime Minister Naftali Bennett and discussed the bilateral relations.
This is Jaishankar’s first visit to Israel as External Affairs Minister. He is visiting the country at the invitation of Alternate Prime Minister and Foreign Minister Yair Lapid.
On Tuesday, Jaishankar met with Israeli Parliament Speaker Mickey Levy and the two leaders discussed at length the common challenges faced by the two countries like radicalisation, and took stock of the developments in the region.
On Monday, Jaishankar held “very productive talks” with Alternate Prime Minister and Foreign Minister Yair Lapid during which the two countries agreed to resume negotiations on a Free Trade Agreement (FTA) from next month with an aim to conclude the long-pending deal by next June.
India and Israel elevated bilateral relations to a strategic partnership during the historic visit of Prime Minister Narendra Modi to Israel in July 2017.
Since then, the relationship between the two countries has focused on expanding knowledge-based partnership, which includes collaboration in innovation and research, including boosting the ‘Make in India’ initiative. (PTI)