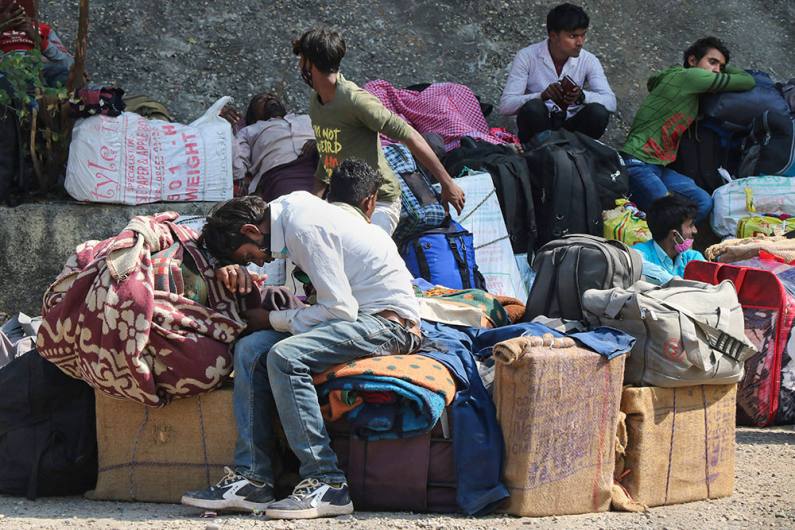 JAMMU, Oct 19: Thousands of migrant workers fleeing Kashmir along with their families queued up outside ticket counters of railway stations and bus stops here Tuesday as targeted killing of minorities and non-locals by terrorists triggered an exodus from the Valley.
The security in and around the railway stations and bus stands in Jammu and Udhampur has been beefed up as a precautionary measure as people have been arriving in large numbers, desperate to leave ahead of schedule, and more are on the way, officials said.
Outside the railway station in Jammu, men, women and children were seen waiting on the roadside in long queues without basic facilities of water or shelter.
As per rough estimates, 3 to 4 lakh migrant labourers, most of them Hindus, from Uttar Pradesh, Bihar, Chhattisgarh, Jharkhand and Uttarakhand come to the Valley every year in early March for skilled and unskilled jobs such as masonry, carpentry, welding and farming, and go back home before the onset of winter in November.
But the selective killings have triggered a fear psychosis among them, propelling them to flee before they had planned to.
On Sunday, two labourers from Bihar were gunned down when terrorists barged into their accommodation in Kulgam district, taking the number of civilians killed in targeted attacks in Jammu and Kashmir this month to 11. Another labourer sustained bullet injuries.
”There is grave fear and terror after the killings of labourers. This has never happened in the past. So we fled the Valley to save our lives and also our children,” Santosh Kumar of Bihar’s Sitamarhi district said.
A brick kiln worker in the Rajpora area of Pulwama district, Kumar said most of those fleeing are scared as there is no guarantee of their security. (Agencies)