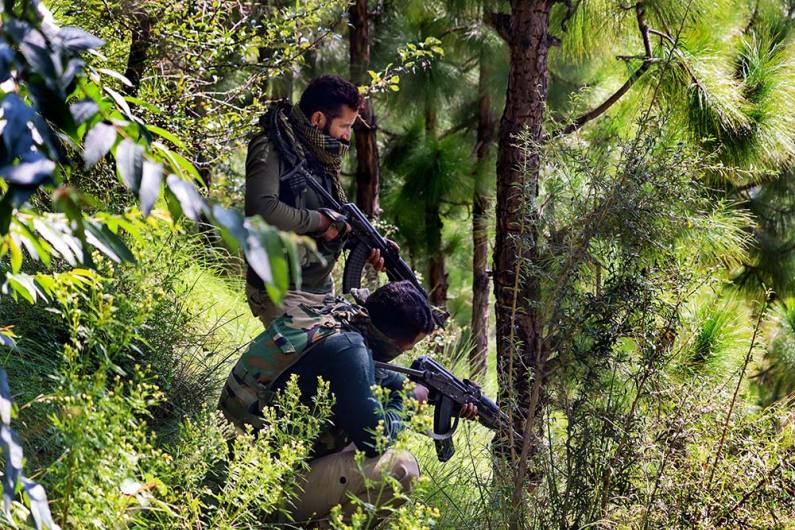 Jammu, Oct 19: As the counter-insurgency operation in the forests of Jammu and Kashmir’s twin-border districts of Poonch and Rajouri entered the ninth day today, announcements were made urging locals to stay indoors for their safety, officials said.
People were alerted through the public address systems in local mosques in Bhata Dhurian and adjoining areas as the security forces prepared for a final assault against terrorists believed to be hiding in the forests of Mendhar in Poonch district, officials said.
Locals have been asked not to venture out into the forest area and to keep their livestock at their homes in view of the ongoing operation, they said. Those who have gone outside were asked to return to their homes along with their animals, the officials said.
While a Junior Commissioned Officer (JCO) and four other security personnel were martyred in a fierce gunfight at the start of the counter-insurgency operation in the Surankote forest of Poonch on October 11, four other soldiers including another JCO were martyred in another encounter in the Nar Khas forest in Mendhar Thursday evening after the security forces extended the cordon and search operation.
An encounter was on in the adjoining Thanamandi forest in the Rajouri district on October 11 when the security forces confronted the fleeing terrorists who later managed to escape.
The entire forest belt continues to be under tight security cordon to kill the terrorists, the officials said, adding, the area is mountainous and the forest is dense, making the operation difficult and dangerous.
Eight suspects, including a woman and her son, were detained for questioning from Bhata Dhurian in connection with providing logistical support to the terrorists. However, it has not yet been ascertained whether the support was given voluntarily or under duress, the officials said.
Earlier on Saturday, Deputy Inspector General of Police, Rajouri-Poonch range Vivek Gupta said the presence of the terrorists in the forest area connecting Poonch and Rajouri was observed two and a half months ago and accordingly tactical operations were launched to track them down.
“The joint security grid was tracking different groups of terrorists but sometimes operations take time, depending on the topography of the area. The contact with the terrorists was established on three occasions during the start of the operation, based on the intelligence inputs,” the officer had said, adding, the terrorists are holed up and the joint forces are on the job to take the operation to the logical conclusion.
The army has already deployed para-commandos and a helicopter was seen hovering over the forest area on Saturday for surveillance.
The traffic between Mendhar and Thanamandi along the Jammu-Rajouri highway remained suspended as a precautionary measure for the fifth day today in the wake of the ongoing operation.
Rajouri and Poonch in Jammu region have witnessed a rise in infiltration attempts since June this year, resulting in the killing of nine terrorists in separate encounters. (AGENCIES)