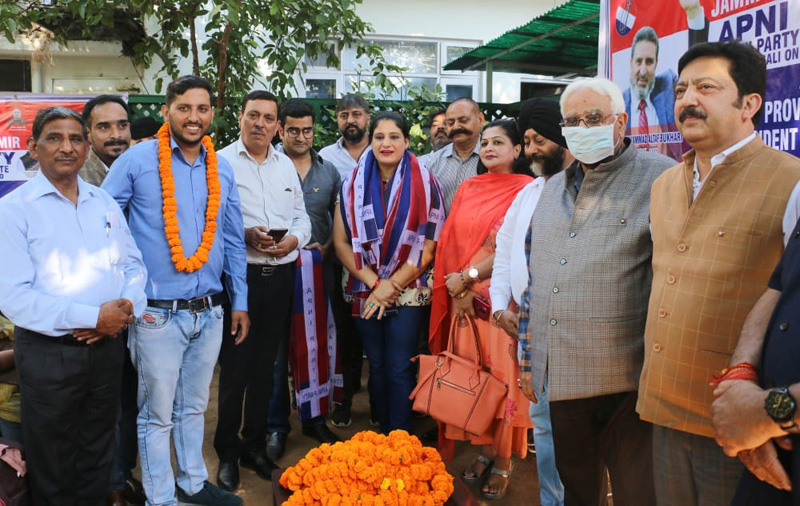 JAMMU, Oct 18: Apni Party general secretary, Vijay Bakaya said that the elections should be held without further delay in J&K to end the feeling of alienation and sufferings of the people.
Addressing a programme organised by the party in honour of newly appointed provincial president, Youth Wing Jammu, Vipul Bali he said the holding of Assembly poll in the UT will end the alienation.
Meanwhile, a prominent social activist Archana Kaul from Janipur who works with several NGOs also joined Apni Party on the occasion.
Besides party general secretary, Vijay Bakaya, provincial president Jammu, Manjit Singh, provincial president, Women Wing, Namrta Sharma, Ex-MLA, Faqir Nath, Ex-MLA, Prem Lal, provincial secretary, Dr Rohit Gupta, SC State coordinator, Bodh Raj Bhagat, OBC State coordinator, Madan Lal Chalotra, State vice president Youth Wing, Raqeeq Ahmed Khan, State general secretary Youth Wing, Abhay Bakaya, Trade Union provincial president, Jammu, Raj Kumar, ST Wing provincial president Jammu, Choudhary Shabir Kohli and several others were present.
Welcoming the appointment of Vipul Bali as provincial president Youth Wing Jammu, Vijay Bakaya hoped that the Youth Wing will work with dedication for the redressal of issues being confronted by the youth.
Bakaya said that “The youth are the backbone of any society and we should channelize their energy towards the right direction. It is imperative for the Youth Wing to inform youth about the policies and agendas of the Party.”
“Our Party is committed for the equal development, and employment opportunities in Jammu and Kashmir provinces,” he said.
While honoring Vipul Bali, provincial president Jammu, Manjit Singh said that “Apni Party is meant for the development of J&K without any discrimination of region, and religion. We will work for all sections of society including marginalized people.”
There is a feeling of hopelessness among the people in absence of an elected Government in J&K from the last over three years, he said and added that Apni Party was the only political party which initiated the activities and involved the people in the process.
Speaking on the occasion, Namrta Sharma said “Youth can play a major role to take forward the policy and agenda of Apni Party. We have provided a platform to the youth to move forward.”
Caption: Apni Party leaders during a meeting at Jammu on Monday